After ten years of defeats by his illustrious fellow countryman, Egypt’s Hisham Ashour finally got the better of four-time world champion Amr Shabana to become the only unseeded player through to the quarter-finals of the El Gouna International Open, the third PSA World Series squash event of the year at Abu Tig Marina in the Red Sea resort of El Gouna.

It was in January 2002 that Ashour, now 29, first faced his Cairo compatriot on the PSA World Tour – since when 32-year-old world No6 Shabana has amassed eight successive victories, the latest being only three months ago in the final of the Comfort Inn Open in Canada. 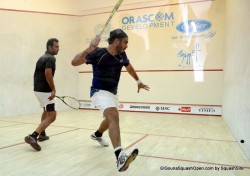 It was a typically fast and furious clash – but on this day the sixth seed was unable to keep Ashour and his winners down as the underdog progressed to his long-awaited 13-11, 9-11, 11-9, 11-8 victory after 48 minutes.

“Do you know how many years I’ve been trying to win against him, and never ever succeeding,” said the world No16. “It’s been probably what, eight, nine years? And getting close sometimes, but because of his experience, and craft, and immense talent, not succeeding!

“Today, I beat four people: One, the Legend; two, the four times world champion; three, the big brother; and four, the fair player who is so respectful on court.” 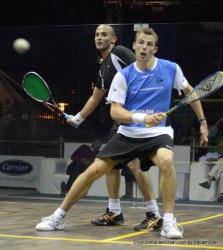 Ashour now goes on to face the reigning world champion Nick Matthew, after the third-seeded Englishman survived a scare in the first evening match on the glass court. Mohd Ali Anwar Reda, a 22-year-old from Cairo, gave the sizeable Egyptian crowd at El Gouna and on TV hopes of an upset as he took the first game and had game balls at 10-8 in the second to double his advantage.

“That lasted a bit longer that I expected,” admitted the 31-year-old from Sheffield after the 85-minute encounter. “Tonight we were both playing well in patches – I was playing three or four points quite well, then he would. But we didn’t seem to find a real momentum throughout.” 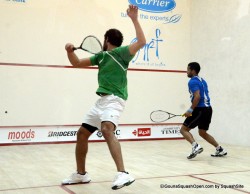 Hisham’s younger brother Ramy Ashour also prevailed to move closer to reaching the final for the second time since 2010 after beating Adrian Grant in four fast-paced games. The Englishman fought back well to take the second, but in the end Ashour junior’s pace and shot-making proved too much. 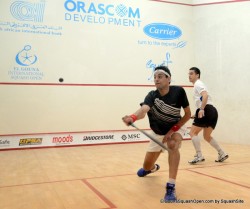 There were further Egyptian successes from Mohamed El Shorbagy and defending champion Karim Darwish – who will now meet in the quarter-finals to ensure local interest in the last four.

El Shorbagy, the 21-year-old rising star of world squash, faced France’s Thierry Lincou, with 36 years of experience to call upon. The French veteran made an untypically fast start as he took the lead – but Shorbagy struck back to lead 2/1. A series of unforced errors cost the Egyptian at the start of the fourth, but the seventh seed prevailed in a tense decider to win 5-11, 11-8, 11-8, 8-11, 11-8.

“I don’t know what to say, he played very well, I didn’t expect him to play that well to be honest,” admitted the relieved winner. “I think I played well in patches, I was patient, but at others, I just wasn’t. Still, we had some very tough rallies. I think he likes playing me, and I like playing him! It was a Tecnifibre battle!” added El Shorbagy. 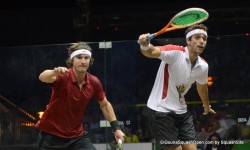 Darwish looked to be taken by surprise by the attacking start made by Jonathan Kemp as the Englishman took the first game 11-7. The former world number one from Cairo dominated the next three games though, taking them for the loss of just seven points.

“So happy to be in the quarters, in this beautiful setting of El Gouna, and I hope I can stick around a bit longer.” 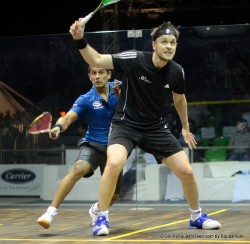 Top-seeded Englishman James Willstrop will face Dutchman Laurens Jan Anjema in the only quarter-final not to feature Egyptian interest. Less than a month after meeting Saurav Ghosal in the Canary Wharf Classic in London, world number one Willstrop survived game balls in the first to beat his training partner 14-12, 11-2, 11-7.

“I was much more mentally tuned and solid than I was in Canary Wharf, I think I played better,” said the 28-year-old from Leeds. “Winning the first was crucial, then the second, momentum with me, but again had to dig in the third. Tonight was a good mental performance, I think.”

“This is why I’m playing squash – this is such an amazing feeling,” exclaimed Anjema, the No8 seed from The Hague. “Playing in the lion’s den . I’m so happy with my performance. He is just so fast, so tricky, and if I was not quick enough to the front he would have me all over the place, but I just kept focusing on my game, nothing else to focus on really, is there.”