Queensland’s Rachael Grinham said she was looking forward to the challenge of taking on world number one Nicol David after defeating Australian teammate Donna Urquhart in the quarter-finals of the Australian Open squash championships in Canberra on Friday.

Grinham was in great touch as she beat a nervous looking Urquhart in straight games 11-7, 11-4, 11-7 to book her place in the final four.

The 34-year-old will now play David for the first time since January and said that far from being daunted by the prospect, she was relishing the opportunity. Grinham, a former world number one herself, has not beaten David since the final of the British Open in September 2007.

“She can just play error-free squash and pick up everything, and keep pushing the ball to the back of the court and make you go for stuff,” Grinham said.

“Because she can pick up balls that are normally winners against most girls you’re forced to play 10 winners to win one rally. I’m looking forward to it, to trying to beat Nicole. I always want to play her but I tend to lose before I get to play her. I like to have the opportunity to play her if I feel in good shape, and I feel pretty good at the moment.”

David cruised into the semi-finals when opponent Annie Au of Hong Kong was forced to retire with a leg injury midway through the third game.

Au hurt her left leg towards the end of her second round win over Denmark’s Line Hansen on Wednesday but thought a day’s rest would allow it to mend.

“In practice it was okay, but in practice you always know where the ball is going to go,” Au said. “Once we got into the match I couldn’t twist my leg to play a shot. I thought it might get better but it didn’t.”

David said she realised Au had a problem early on, but didn’t want to take any chances.

“I was just focusing on what I had to do because even if you think she’s not there physically, she can still play shots and she can still come up with some winners,” David said. “It was unfortunate because she was slowing down towards the end of each game so I knew something wasn’t right.” 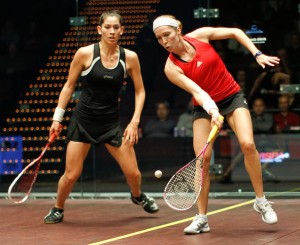 “I’m used to beating people with my pace, taking the ball early and hitting it hard on the T but she does it better than me,” Perry said.

“So I have to play a little bit differently and I don’t find it all that comfortable. I managed to slow it down a bit more from the last time I played her.

“I didn’t play very well against her in Malaysia but I’ve had a few good matches since then and I was confident I could player her better today.”

Second seeded Englishwoman Jenny Duncalf became the last player through when she saw off a tenacious Natalie Grinham. Duncalf took the first game with ease but was then locked in a titanic battle with the Australian-born Dutchwoman before winning 11-4, 12-10, 8-11, 11-8.

Grinham chased and chased all match as an increasingly agitated Duncalf struggled to put her away. But at 8-8 in the fourth game the Englishwoman finally broke clear and wrapped up an enthralling contest.

“She seemed to get quicker the longer the match went,” Duncalf said.