Sarah Kippax and Natalie Grinham continued the successful run by qualifiers in the first round of the Cedrus Investments Women’s Cayman Islands Open by earning unexpected berths in the quarter-finals of the WISPA World Series squash event in its third year at Grand Cayman in the Cayman Islands.

“I felt as though I played well today,” Kippax told www.squashsite.com after reaching the last eight for the second year in a row. “Annie has such good touch at the front with her drops, so I just kept it deep as much as I could, ran down anything short hoping she’d have to cut it finer and finer until she made a mistake. 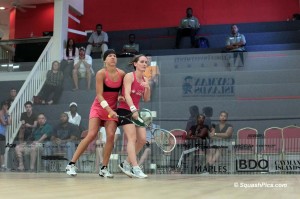 Natalie Grinham maintained the form which saw her win last week’s Atwater Cup in Canada unseeded. The former world No2, now ranked 32 in the world, is on a comeback trail after the birth of her first child almost a year ago.

The Australian-born Dutch star faced sixth-seeded Australian Kasey Brown, the world No6 who was ranked eight places lower than Grinham when they last met in the 2009 World Open. But the comeback queen was able to maintain her unbeaten record against Brown, beating the New York-based 25-year-old 11-6, 13-11, 14-12 in 48 minutes.

“I feel pretty exhausted after that – I’ve had a long run of matches now, I’m not used to it anymore,” conceded Grinham junior, a quarter-finalist in the inaugural Cayman Islands Open in 2009.

“Kasey’s improved a lot over the last couple of years, she’s much fitter and her shots are really good. It was tough to break her down.

“I was doing well in the third, then my string broke – I’ve been playing well with that racket, I hadn’t lost with it, and the new one had a different feel even though I string them the same. I started to lose the third easily and it took a while to get used to it.

“I actually think I’m playing better than before – I was world number two for a long time, and that brought extra pressure every time I went on court. Now I’m the underdog, I can play with more freedom and I’m really enjoying it. I’ve calmed down a lot in my normal life, but not on court!

“It’s a challenge to play on the tour and be a parent too,” added the 33-year-old from Almere. “But I love challenges!” 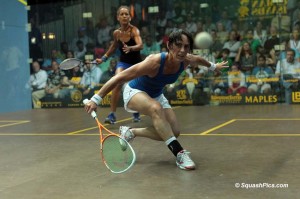 West admitted that the world No4 was a tough opponent: “There’s such a gap once you start hitting the top players,” said the Cayman Islands champion. “Top thirty you can have a go, top ten you’re in trouble, but when you reach the top three, whoaaaaaaaaaaaaaaaaaa!”

Malaysia’s world number one Nicol David duly reached the last eight as she began her bid to win the title for the third year in a row. The 27-year-old from Penang ended New Zealand hopes in the event by beating world No15 Jaclyn Hawkes 11-7, 11-6, 11-3.

David will now take on Natalie Grinham for their first meeting since contesting the World Open final in Amsterdam in September 2009. But the clash will be the pair’s 29th on the WISPA World Tour since February 2000 – 16 of which were in finals! 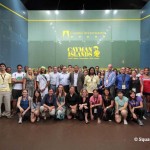