“Last year was a shocker really, one of those days, I just couldn’t hit anything,” the Queenslander toldwww.squashsite.co.uk later. “Not to mention that Jenny was chopping everything.

“Today, I felt good, and I’m rather happily surprised with the way I pulled up today,” added Grinham, now in her 58th WISPA final.

“I’m going to try and loosen myself up, to try and get prepared to play Queen Nicol! I used to beat her, I haven’t for a while though, and it’s a nice challenge to look forward to.” 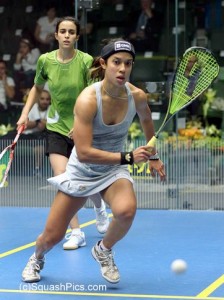 After sensational upsets over the event’s third, thirteenth and sixteenth seeds, 17-year-old El Tayeb finally met her match in Nicol David, the 27-year-old world number one from Penang who is unbeaten so far this year.

“I tried to keep the ball tight, and the rallies long, and to play all the shots I could possibly play, run and make her run,” explained El Tayeb afterwards. “To be honest, I’d never run as much for a single game than I did in that first one! So after that, I was a bit tired.

“This tournament has been so great, I think I am on the right track. I was in the semi final – but more importantly, I put Nicol David, world number one, under pressure!”

David admitted that she was fully aware of El Tayeb’s potential: “I’ve been watching her for a long time now, and she has come up so strong!

“Today, I was so expecting her to play like that, I was prepared to run for all the nicks, for the four corners, and did she bring her game up. And like all the Egyptian players, when she gets on a roll, she is not going to stop!”

David is now one win away from her ninth Tour title this year – but the 50th of her career!