“‘Magnifique’ pretty well sums up Gaultier’s performance tonight,” said tournament spokesman Jay Prince. “The only disappointing part was that when sell-out crowds are witness to a stellar performance, they always want an encore.”

Unfortunately for them, Gaultier did not cooperate by not allowing England’s former world No1 to earn a single game. Matthew himself was left with little to do but applaud the Frenchman’s performance.

Gaultier was simply unstoppable, putting his astounding quickness and relentless attacking style to full effect. From the start, the world No3 from Aix-en-Provence owned the left wall. More specifically, he owned the back left corner where ball after ball found the full depth of the court.

The Frenchman – who boasted a pre-match 10-8 career record over Matthew, but lost their previous meeting this year, in New York – never looked back once referee Mike Riley said “love all”. Gaultier raced out to 6-2 and 7-3 up before Matthew began to recover from what had hit him.

“In every game I was always two or three points behind,” said Matthew. “When it was my turn I was always able to bring it back level. But then he would go again. I was never ahead in the business end of the games.”

In fact, Matthew held a lead just once at any point in the match, and that came when he snuck ahead at 2-0 to open the third. The 32-year-old from Sheffield’s best opportunity was in the second game. Gaultier had jumped out early, leading 5-2 and 6-4, but Matthew simply could not find a way to garner a lead.

From 7-7, the pair traded points to 11-11, but once Gaultier had secured the one point cushion at 12-11, he played a masterful drop (a step-back backhand drop that would have made Michael Jordan proud) at the left front, leaving Matthew stumbling – and behind two games to love.

Throughout the match, Gaultier kept Matthew’s strength – cutting the ball off at mid-court – at bay, while simultaneously controlling his own tempo.

“I managed not to play too fast all the time; to mix the rhythm by hitting some high balls to take control of the T,” said the newly-crowned champion, now winner of 21 PSA Tour titles. “I tried to take a few things out of his game as well. It’s always interesting to watch all the guys play and see how they play tactically. I was happy to do it.”

When asked about Gaultier’s ability to neutralise his typical dominance at the middle of the court, Matthew simply said: “He’s always really deadly when he’s attacking on the left side. But that’s the best he’s played against me in terms of his defensive work,” conceded the Englishman.

Perhaps the most impressive difference with Gaultier was his ability to maintain his composure – not only when referee decisions didn’t go his way but, in particular, when Matthew succeeded in closing gaps midway through each game. He credits a new perspective on life after becoming a father for the first time eight weeks ago.

“I realise life is not only squash, and that was all my life before,” explained the 29-year-old Frenchman. “I always put squash into one box and it was only it. And when you win life is beautiful, and when you lose it’s the end of the world. So now it gives me a great balance.

“There’s other things important in life. It gives me wings and has changed my attitude as well. It makes me more calm on court. I’m a really happy dad, and my girlfriend is really doing well. As long as Nolan is healthy, I’m happy. It’s an amazing feeling.”

So a fabulous week by the Bay comes to a close, with players loving what for most of them has been their first visit to San Francisco. “It’s been a great week. You know, you get to a stage where you play the same tournaments year in year out, and you come to somewhere new, it’s been one of my most enjoyable weeks on tour for a long time,” said Matthew. 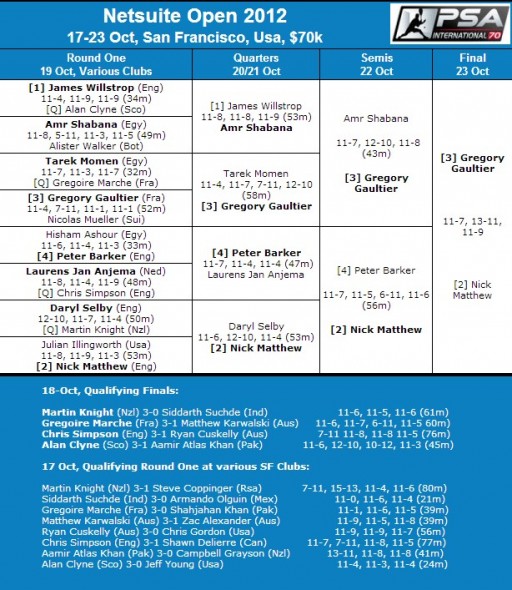