Londoner Adrian Grant ensured domestic representation in the semi-finals of the Springfield Solutions British Grand Prix in Manchester – but the world No15 survived a dramatic opener after fighting back from two games and match-ball down against qualifier Saurav Ghosal in the first round of the PSA World Tour International 70 squash event at theNational Squash Centre. 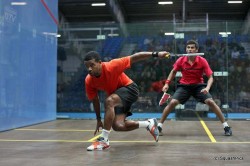 “I have a bit of a loss of confidence at the moment, so I was not at the top of my form when I started today,” said left-hander Grant. “And I really don’t know why I am such a slow starter. I warm up really well, but I just cannot seem to find that burst of energy I get at the end of matches. I am trying to get the same feeling at the start of the match that I get in the third for example, but so far, I just cannot do it.

“Certain things do fire me up, like when I’m playing rubbish. I’m thinking, ‘come on, this is ridiculous’, or a bad decision, I get a positive reaction, but still, I just can’t be fired up from the start the way I would like to.”

UK-based Ghosal summed up his reaction on Twitter: “Lost 3-2 today after being 2-0 up and 10-9 match ball in the 4th!!! Absolutely gutted to say the least. Good performance…just need to win.” 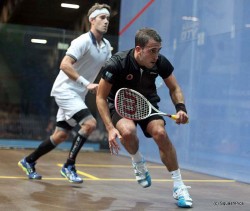 Grant moves on to face fellow Londoner and England team-mate Peter Barker for a place in the last four. Fourth seed Barker was also stretched in a marathon encounter with Borja Golan before beating the top-ranked Spaniard 11-8, 7-11, 12-10, 11-2 in 85 minutes.

“You know that a match against Borja is going to be ultra-competitive,” admitted world No7 Barker. “I lacked a bit of mental sharpness today and when I found myself 7-3 down in the third. I knew I had to do something different. And I was a bit more precise after that.”

The event’s top two seeds eased into the second round, but not without demanding encounters against English compatriots. 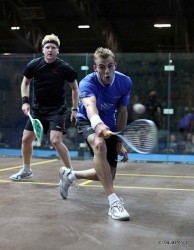 Second seed Nick Matthew, the world No2 from Sheffield, faced Tom Richards. The world No12 from Surrey gave the world champion an almighty run for his money in the first two games. But underdog Richards was unable to capitalise on the game balls he had in each as Matthew survived two tie-break games before taking the third in a stunning white-wash.

“I think I played the important points well,” said 2011 runner-up Matthew after his 14-12, 12-10, 11-0 victory. “We had two tie-breakers, and whereas he was patient all through the games, suddenly he tried to force it. I could very well have found myself 2/0 down today, after having had game balls in both games. That’s why in the third I was making sure I was getting it right.” 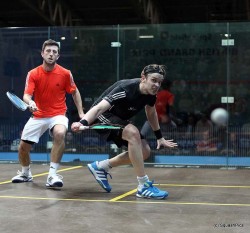 Favourite James Willstrop, the world No1 from Leeds, conceded three fewer points than Matthew in his first round win over England team-mate Daryl Selby. Like Richards, world No11 Selby contested the first two games strongly before finding Willstrop too hot to handle in the third.

“There were a few cobwebs that needed to be cleared out, there’s no way you’re going to be in top form at the start of the season,” admitted Yorkshireman Willstrop after his 11-8, 11-7, 11-4 win. “I was ready for a physical test. I had to hang in during that second game, and when I managed to pull away it gave me a boost for the start of the third.”