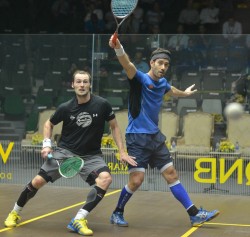 Spaniard Borja Golan scored one of the biggest scalps of his career when he defeated top seed and defending champion Gregory Gaultier in the quarter-finals of the Qatar Classic, the seventh PSA World Series squash event of the year at the Khalifa International Tennis & Squash Complex in the Qatari capital Doha.

“It’s amazing – I don’t have words for it,” exclaimed the seventh seed from Santiago de Compostela after the 80-minute 7-11, 12-10, 11-6, 15-13 victory over world No 2 Frenchman Gaultier which takes him into his first ever World Series event semi-final.

“He’s one of the best players of the last ten years – but I knew if I played my best, probably I could have a chance.

“I think I was very sharp at the front of the court,” added the 30-year-old who reached a career-high world No 8 earlier this month. 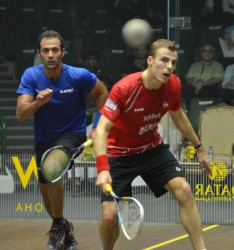 Golan will now meet world champion Nick Matthew for a place in the final. The third seed from England faced sixth-seeded Egyptian Amr Shabana in an eagerly-anticipated battle between two former world number ones.

Matthew had to save two game balls in the opening game to take the lead over the 34-year-old four-time world champion from Cairo.

The crowd seemed set to enjoy a mighty encounter between two of the sport’s greats – but, just four points into the second game, Shabana offered his hand to Matthew to concede the match as the result of a knee injury sustained during the first game.

“Real shame that Shabs had to pull out tonight,” tweeted Matthew to his followers later. “Was shaping up in to a really tough match.” 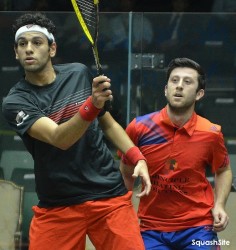 The other semi will be an all-Egyptian affair between twice champion Karim Darwish, the No 4 seed, and fifth seedMohamed Elshorbagy.

Both ended the runs of second round news-makers: World No 6 Elshorbagy despatched Daryl Selby, the Englishman who 24 hour earlier celebrated a 19-year wait by beating world No 2 James Willstrop.

Selby went down 11-9, 7-11, 11-4, 11-2 in 47 minutes as Elshorbagy took a step closer to a second successive appearance in a final on the Doha court, having finished as PSA World Championship runner-up in Doha last December.