Twice former runner-up Gregory Gaultier survived a 93-minute marathon in the $327,500 Saudi PSA World OpenSquash Championship to reach the quarter-finals of the richest PSA World Tour event of all-time at Sunset Beach Resort in the Saudi Arabian city of Al-Khobar.

The 27-year-old Frenchman was facing two times champion David Palmer in a repeat of the 2006 final won by the Australian. The 34-year-old from New South Wales is making his 11th successive appearance in the event since his debut in 1998.

There was little to choose between the two PSA Tour stalwarts in the 25-minute first game, but at nine-all Palmer got a lucky nick at the back of the court and Gaultier’s boast into the tin on the next point gave the Australian the lead.

The Frenchman took the second to draw level and Palmer came close in the third – but Gaultier had the upper hand in the fourth to beat the tenth seed 9-11, 11-7, 11-8, 11-2 in 93 minutes, the longest match of the tournament so far. 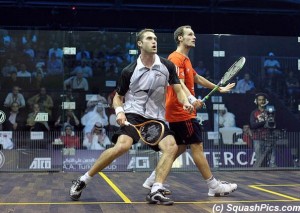 “He was really sharp today,” said a relived Gaultier afterwards. “When I arrived to warm up he was already here, so I knew he was going to give it a big push.

“I was trying to keep it tight and keep the pace high, but he was making the pace even faster,” explained the fifth seed from Aix-en-Provence. “You have to keep the ball really tight and keep running otherwise he eats you alive – like he’d eat his dessert – I did a lot of running today!

Palmer was not unduly unhappy with his game: “I don’t think I did too much wrong tonight,” said the US-based 2002 and 2006 champion. “I got the start I wanted, backed it up with a good second too.

“I went a bit negative when I thought I might have him tired in the third, then I got a run of points at the end but couldn’t finish it from there.

“In years past, I probably would have won from there – I brought him to the breaking point but just couldn’t push on.

“All things considered though I’m happy with how I’m playing – it’s top eight standard, I think, and as long as I can produce to that level I’ll carry on playing.” 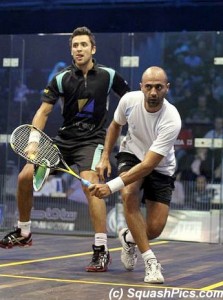 After a rest day, Gaultier will now meet third seed Amr Shabana, the defending champion from Egypt looking to win the Tour’s most prestigious title for the fifth time.

Shabana took the opening two games against Mohd Azlan Iskandar – then squandered four match-balls from 10-6 in the third to let the 14th seed from Malaysia back into the game. The former world number one from Cairo soon found himself in a fifth game decider – but the mercurial left-hander romped to an 8-2 lead before serving for the match at 10-3.

Top seed Nick Matthew secured the only straight games win of the day, beating Egypt’s Hisham Mohd Ashour 11-8, 11-6, 13-11 in 49 minutes. The 30-year-old from Sheffield is bidding to become the first ever English winner of the title – a prospect which was boosted 24 hours earlier when Hisham’s younger brother Ramy Ashour, the world No1, was forced to exit the event with a hamstring injury.

“I can’t overstate how difficult a player his is to play,” said Matthew after his third round win. “He’s unique – well, him and Ramy I suppose – and with Ramy coaching him in between games, it felt like I was playing both of them!

“I don’t think I played at my best – I’ve got better each day so far and there’s another rest day now to prepare for the real crunch part of the tournament.” 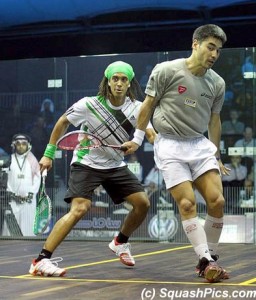 “Ali’s my best mate on the tour, so it’s always difficult when we play each other,” said the 34-year-old from Marseille. “He had nothing to lose today, I didn’t feel much pressure on me, but I was just a little nervous.

“I had to really dig deep and concentrate hard, especially at the end of the match.

“We all feel really comfortable here, the atmosphere is relaxed, we can enjoy the temperature and the sun. The tournament is perfect, it’s always a pleasure to come here.

“I don’t think about winning – there’s so many good players in the draw, you can’t predict what’s going to happen,” added the oldest player in the championship. “But, trust me, I’ll be giving everything I can.”