Avenging his defeat by the Egyptian earlier in the month in London, Frenchman Gregory Gaultier reclaimed his mastery over fellow former world number one Amr Shabana to reach the semi-finals of the JP Morgan Tournament of Champions at Grand Central Terminal in New York.

The third seed will now face top seed Nick Matthew after the Englishman denied any Egyptian interest in the last four of the first PSA World Series squash event of the year by beating No7 seed Mohamed El Shorbagy. 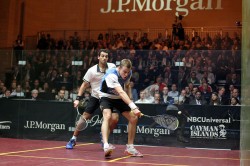 In addition to losing to Shabana in an epic final of the ATCO PSA World Series Finals two weeks ago, Gaultier went into his quarter-final match against the four times world champion from Cairo 10-13 down in Tour matches played to date.

After the first two games were shared, the capacity crowd under the massive Grand Central chandeliers buzzed with anticipation of another five-game battle.

But it was not to be as Gaultier seized control of the match. “I wanted to make the rallies long and keep in the rear corner,” said the 29-year-old world No3 from Aix-en-Provence. 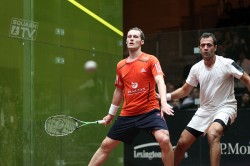 The Gaultier game plan worked: Shabana spent most of the match exactly where Gaultier intended. Without any room to play his game, the fifth seed could not muster an attack and Gaultier won the match 11-9, 5-11, 11-5, 11-5 in 62 minutes.

“I wanted to peak for this tournament,” Gaultier said after the match – and he looks to be doing just that!

Matthew, returning to the tournament squash court for the first time this past week after a two month injury hiatus, has been diligently trying to manage expectations for an immediate return to the form that kept him at the top spot in the PSA world rankings throughout 2011.

“Anybody who thinks that you can quickly return to form after being out of commission for two months doesn’t know squash,” he had said earlier in the week. 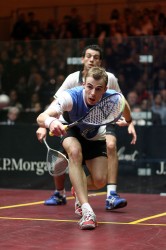 But, minutes after defeating rising Egyptian force Mohamed El Shorbagy 12-10, 11-7, 11-5, favourite Matthew admitted: “I think tonight’s match shows that I am back!”

In the match’s early going, it looked as if the 31-year-old Englishman might indeed go under to the sport’s latest star. The 21-year-old El Shorbagy came out on court with a blazing racquet, hammering the ball with such speed, power and intensity that the tournament’s top seed seemed a bit shell shocked.

“The pace he played at the start of the match was something I haven’t seen for a couple of months,” said Matthew. The three time Tournament of Champions finalist quickly fell behind 1-5.

“But you don’t become No1 or a World Champion without knowing how to adjust your game,” said tournament spokespersonBeth Rasin. “And Matthew did just that.” 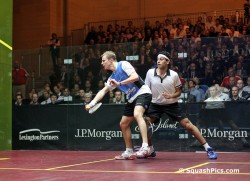 The first game comeback took some of the wind out of El Shorbagy and emboldened Matthew, who quickly grabbed a 4-1 lead in the second game. The shift in momentum was completed when Matthew won the second game 11-7.

His 11-5 third game victory secured the semi-final berth for Matthew – and not only his 18th Tour meeting with Gaultier in almost ten years, but his third clash with the Frenchman at Grand Central since 2006.