Ramy Ashour is one step away from regaining his world number one ranking after beating fellow Egyptian Karim Darwish in the semi-finals of the Cathay Pacific Sun Hung Kai Financial Hong Kong Open.

But the 22-year-old from Cairo will have to beat French rival Gregory Gaultier in tomorrow’s final of the $147,500 PSA World Tour squash event, the fifth PSA Super Series championship of the year, in order to reclaim the pole position he lost to England’s Nick Matthew in June. 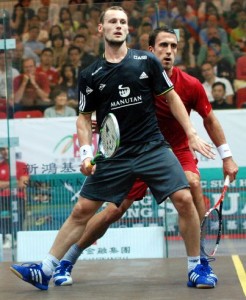 Fifth seed Gaultier reached the final for the fourth year in a row after beating England’s Peter Barker 11-7, 11-3, 11-5 in 49 minutes. It was the eighth seed from London who dashed England team-mate Matthew’s hopes of a sixth successive Tour title in Friday’s quarter-finals – in his first ever victory over England’s first world number one for six years.

Gregory, who also topped the world rankings briefly before plummeting to No6 in just four months, is celebrating his 39thPSA Tour final – and will be hoping to make up for finishing as runner-up for the past three years.

After winning the first game of his semi-final, No2 seed Ramy Ashour only managed a single point in the second as Karim Darwish looked set to repeat his shock win over the Egyptian number one in May’s Sky Open in the pair’s home town of Cairo. 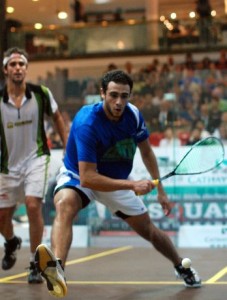 “It’s great to be back in the final,” Ashour, runner-up in 2006, told www.squashsite.co.uk afterwards. “I was very tense, very tense, but my brother (Hisham) gave me some great advice – sometimes he gives me too much, too fast, but I remember it!

“Darwish played so well today, hitting so many nicks, I had to keep pushing myself,” added the exuberant world No2, now in his 27th Tour final.

“I had too much energy, it overwhelmed me, I just had to push myself, push myself to overcome it.”