Brisbane’s Zac Alexander stormed into the main draw of the Australian Open with a straight games win over Malaysia’sKamran Khan in today’s (Monday) qualifying finals of the $142,500 PSA World Tour squash event in Canberra – the fourth PSA Super Series championship of the year.

Alexander was the most impressive of all the final qualifiers as he cruised past Khan, son of Pakistan legend Jansher Khan, 11-7, 11-7, 11-3 – and into a first round clash with Mohamed El Shorbagy, the 14th seed from Egypt.

“That’s seven Australians in the main draw,” a delighted Australian head coach Byron Davis said. “And we could have as many as 10 in the women’s draw after their qualifying so it’s a great day for Australian squash.”

Alexander has risen to number 70 in the world and is certain to go higher now he has reached the main draw of a PSA Platinum tournament for the first time.

“I’m really happy – Kamran obviously played really well yesterday to take Nicolas Mueller out, and that helped me in a way because I was a lot more confident against Kamran than I would have been against Mueller,” he said.

“I’ve played him four or five times and I’ve had the edge on him so I knew how to play against him.

“This is just massive.”

Alexander has won two smaller tournaments on the Australian Squash Tour, in Darwin, Melbourne and Sydney, and said he knew he was in form heading into Canberra.

“I’ve been getting the confidence up in the smaller tournaments and now I get to test myself against the big boys so we’ll see how I go – the first round should be interesting.”

Arnold said he had never played better than during his win over former top 15 player Abbas, and credited his good form to a move back to his former coach Sue King in Sydney.

“When I came back from New York I was playing terribly but she was so patient and now I’m feeling a lot better about my squash.”

Arnold will have to keep his form going as he goes up against fellow New South Welshman Cameron Pilley, while Karwalski plays Englishman James Willstrop.

Shuja, runner-up in 2008, was pushed to five games for the second day in a row.

“I tried my best not to go to five but Amr’s a very good player and he’s had the edge over me in the last couple of matches,” Shuja said.

“I knew it was going to be a hard one. My body was a bit tired from yesterday and it took a while for me to warm up.

“I knew I was strong enough to push through. I was really feeling the pressure, but so was he.”

Grayson was also left exhausted after his second long match in a row against one of the fittest players on the tour.

“I really wanted to win and that’s what got me through,” he said.

“He gets a lot back and he gets to the front really fast – I knew I had to be smart, and I knew it was going to be painful for both of us.”

Azan, another who was taken the distance two days in a row, said he had to overcome a severe bout of nerves after letting a two game lead slip.

“Then he got to two-all and I knew I had to play well – I had to focus on every single point.

“I was scared, I mean I was terrified the first three or four points of the fifth game but after a while I said to myself to try my best and not to be overcome.”

Illingworth thought he had blown it after letting three match balls slip in the fourth game.

“Once I lost that game I had to refocus and come out for the fifth game,” he said. “The ball had gone really dead so I requested a new ball which I think helped me just to get it bouncing around and get some length and rhythm back in the game.

“You get a chance to have a shot at one of the big boys and you get excited to see the glass court.”

Fellow American Gilly Lane failed in his bid to join Illingworth in the main draw when he was surprised by Hong Kong’s Max Lee 11-7, 12-10, 11-6.

The 22-year-old Lee said he tried not to think about making the first round.

“Before the match I didn’t think about what would happen if I won,” Lee said. “He’s a good player who plays his shots – I knew I had to stay focused and keep moving well.

“This is the second time I’ve made it into a big tournament and it’s a good opportunity for me.” 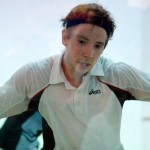 He now faces Karwalski, who sprung a surprise when he beat higher ranked compatriot Steve Finitsis 11-6, 11-4, 11-9, justifying his decision to move to Manchester after the Australian Open in a bid to improve his ranking.

“It’s hard being based in Australia like I have been,” Karwalski said. “I’m 24 now and have decided to make a real go at squash. Until now I’ve been part time on the tour – training five days a week but not really playing the tournaments.”

It was a good day for the Kiwi contingent as all three New Zealanders in action progressed to the second round.

Martin Knight cruised through his opening match against young Queenslander Jamie McErvale 11-6, 11-8, 11-1, but fellow countrymen Kashif Shuja and Campbell Grayson did it the hard way as they battled their way through five game marathons.

Shuja admitted later he had to stop making it so hard for himself: “Usually I play a lot better when I’m down but not that far down,” he said.

“I knew that if I stayed patient and constructed the rallies well I would have a chance so I just gave it my best. I think I’ve had the most five-setters out of anyone on the PSA!

“It’s a focus thing really and something I’ve been working on, that I should try and play the same from start to end, but it hasn’t quite happened yet.”

Shuja plays Italian Amr Swelim for a place in the main draw and Grayson must try and recover in time to take on rising Scottish star Alan Clyne, who demolished Melbourne’s Neeraj Aggarwal 11-3, 11-1, 11-0.

“It was quite comfortable so I saved my legs,” the Scotsman said. “I only arrived a couple of days ago and it was a long trip — I’m trying to get over the jetlag.”

Despite Gordon’s loss it was a still a good day for the Americans with both Julian Illingworth and Gilly Lane impressing in straight games wins.

“Today was a good day – I played pretty well so I can’t complain,” Lane said.

The American number two has been training in Yamba with Cameron Pilley and said the hard work had paid off.

“I had two weeks off in Yamba training so I’ve been kicking to get going and get back into it,” he said.