France stunned second seeds England in today’s emotionally-charged second qualifying round of the SDAT WSF Under-21 World Cup in the Indian city of Chennai in only the country’s third ever win over their European cross-Channel rivals in the sport of Squash.

The third seeds opened up a surprise lead over England in the inaugural World Squash Federation mixed team event at the Indian Squash Academy when Lucas Serme, a linguistics student at the University of the West of England in the UK, beat higher-ranked Englishman Charles Sharpes 11-8, 11-5, 11-4 in 36 minutes.

The pair met each other regularly on the international junior circuit, most notably in the 2010 European Junior Championship semi-finals. But, since leaving their junior days, they have gone their separate ways – Serme into higher education and Sharpes onto the professional squash circuit.

“It’s a long time since we last played, so I really didn’t know what to expect,” said 19-year-old Serme, who manages to combine his studies with training every day and regular appearances in PSA World Tour events.

Though now ranked 87 in the world, more than 50 places higher than the Frenchman, Sharpes has been unable to beat his rival since 2009. 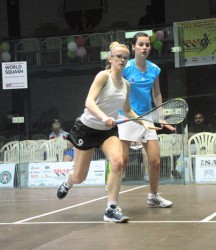 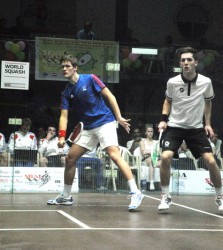 But France fought back when Geoffrey Demont, a 20-year-old from Aix-en-Provence, beat England’s second string Ben Coleman 11-8, 11-8, 11-8 in almost an hour to lead to the first team upset of the event.

“We are lucky as we have a very strong number one and number two, with very little between them,” said the jubilant French coach Philippe Signoret. “Geoffrey has improved a lot over the past five months.

“There is always a great fighting spirit in matches we have against England – and it’s fantastic to have now beaten our great rivals for only the third time ever!

“It’s great to have won our second tie here – but it’s even more special that it was against England,” Signoret continued. “We will celebrate for about 15 minutes – but then we must focus on our last pool match tomorrow, the most important match.”

France will face Hong Kong, the sixth seeds who emerged as 2/1 winners over No7 seeds Malaysia in the earlier tie in Pool B.

Malaysia took a consolation point when Sanjay Singh twice fought back from behind to overcome Wong Chi-Him in five games.

“Malaysia is the dominant country in Asia, so it’s good to get a win over them,” said Hong Kong team manager Wai Hang Wong. “The standard there is very high – but our performance showed that we have the ability to come close to them.”

Action in Pool A concluded with favourites Egypt despatching hosts India 3/0 – but the earlier tie saw an impressive fightback by Australia to beat Germany 2/1.

Australia were given a jolt when 20-year-old part-timer Rudi Rohrmuller put Germany into the lead after battling to a four-game victory in 62 minutes over Queenslander Jamie McErvale.

Sarah Cardwell, the 20-year-old daughter of Australian legend Vicki Cardwell, celebrated her maiden appearance in the event in appropriate style – crushing Germany’s Annika Wiese 11-6, 11-7, 11-4 in just 20 minutes to bring the fifth seeds back into contention.

A commanding performance saw Western Australian Walter Koteka beat Sven Lemmermann 13-11, 11-9, 11-0 to see Australian through – much to the delight of the team, and illustrious manager Rodney Eyles.

“To go 1/0 down in a three-rubber tie is always tough,” said the former world champion afterwards. “But Sarah stamped her authority on her game and took control – she really put some good stuff in.

“She’s certainly got her mother’s genes – she’s completely focussed when you put her in the green and gold!”

Eyles is extremely enthused by the introduction of the U21 team event: “It’s very significant from Australia’s point of view. We’ve suffered over the years from the transition from junior to senior level – but we can now show our youngsters a good pathway, laying the foundation for the PSA and WSA Tours.

“The World Squash Federation have brilliantly orchestrated this and the countries have really supported it,” added Eyles.

“It’s exactly what we needed and I think it will really help inspire our youngsters to take up the game.”

As expected, Egypt overwhelmed fourth seeds India – but the plucky home players, loudly supported by the biggest crowd yet at the Academy, put in impressive performances to make the favourites work for their win.

Chennai-based Ravi Dixit took a game from Marwan El Shorbagy and built up a commanding lead over the world junior champion in the fourth game. But El Shorbagy, now ranked 33 in the world, upped the pressure to close out the match 11-7, 6-11, 11-4, 12-10 – before former world junior champion Nour El Sherbini made sure of victory after beating Anaka Alankamony 11-6, 11-3, 11-7.