The second-seeded Grinham always looked in control against her younger rival as she eased to an 11-7, 11-5, 11-8 win to reach the semi-finals of the $56,000 WISPA World Tour squash event – the sixth WISPA Gold championship of the year.

Former world number one Grinham said she knew she had to keep the ball away from the much taller Urquhart, the No11 seed from New South Wales, and not give her any opportunities to volley.

“She’s very talented and she can be very dangerous,” said the Queenslander. “It meant I had to stick to the back of the court, which meant I had to run a lot.

“With the scoring these days it’s hard to win 3-0 because everyone is quite good, so I’m really pleased to win in three.” 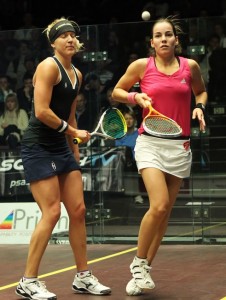 After Duncalf took the first game Brown opened a lead in the second, which Duncalf pulled back to take the game.

She then appeared heading for a straight games win when she had three match balls at 10-7, only for Brown to save all three and win the game into a tiebreak.

But the top-seeded Duncalf regrouped and opened an early lead in the fourth which she never looked like losing.

“I’m a little but upset with myself for losing my concentration in the third,” Duncalf said. “You just can’t slacken off in these matches.”

Brown said she was pleased with how she had played but said he had her chances.

“I could have won the second and if I had, then won the third and gone 2/1 up, who knows what might have happened?” said the New York-based 25-year-old from New South Wales. “But I’m pleased with the tournament and I can build from there.”

In a good day for the English, third seed Alison Waters reached the final four with an 11-5, 11-9, 11-7 win over New Zealand’s last hope Jaclyn Hawkes.

Waters took the first game easily then had to withstand a challenge from Hawkes in the second, during which the Kiwi led 5-0 and 9-6. But in the third the Englishwoman took an early lead and was never headed.

“Jackie played really well getting to 5-0 and put me under a lot of pressure,” said the 26-year-old from London. “She got in front of me so I had to get my length right – that makes such a big difference.” 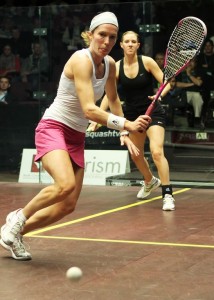 Northern Ireland’s Madeline Perry recovered from a disastrous start to down yet another English player, Laura Massaro.

“I was a bit tight in the first for some reason and I knew I had to turn it around pretty quickly,” she said.

“It’s not unusual for me to be like that at the start – I just get a bit uptight and once I relax I play better squash.

“I think she started quickly and got in front of me on the T so I tried to change my length to get in front of her and I played much better.

“I feel good (about winning the title). Physically I haven’t had any really hard matches. Today there were a lot of lets so it wasn’t hard physically, so I’m feeling good.”