English players dominated proceedings on the opening day of action in the ROWE British Grand Prix in Manchester, thePSA World Series squash event in its second year at the National Squash Centre. 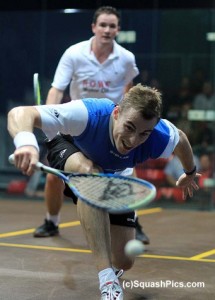 “It’s good to be back on the court where the England squad train – but in the end a court is just a court,” said the top seed from Sheffield after his convincing first round win.

“And I can’t remember Ramy Ashour ever losing on this court,” added Matthew, in a reference to his main rival, the world No2 from Egypt.

Matthew was delighted to be back on court, particularly after missing out on last year’ event when taken suddenly ill on the eve of the tournament. “It’s a strange feeling – not having any ranking points to defend.”

But the event favourite dismissed any thoughts that missing the 2010 event had had a long-lasting effect: “Luckily, I went on to have some good wins elsewhere on the Tour. I’ve got about 101 memories of playing on this court – and about 99 of them are good!

“A few players have put me under pressure in the first round of tournaments recently, so it was good to feel that a couple of things I’ve been working on came good tonight. 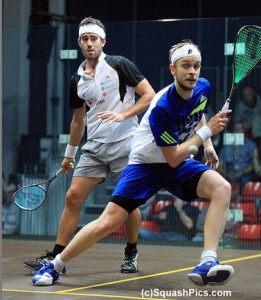 James Willstrop, the world No4 from Leeds who was runner-up last year, had a tougher battle, seeing off top-ranked Spaniard Borja Golan, a qualifier.

“Though I was in my home surroundings here at the NSC, it was my first match – whereas Borja has played his way through the qualifiers so had his eye in.

“It’s a great feeling at the start of the season, feeling fresh and really enjoying playing.”

“I had game-balls in the third but he played the important points better and got the game to go 2/1 up,” said Grant after his first Tour win over Tuominen. “But in the fourth and fifth I just relaxed.

“Yes, this was an important win for me after my injury – I learned a lot from my experience in Australia where I think I wanted to win too badly. I played like a ten-year-old in a British U19 final!

“I’ve changed my game a lot and have set myself goals between now and December,” added the 30-year-old, now ranked 17 in the world.

“Steve was a dangerous first round opponent – he’s got some great shots,” said the No7 seed. “I was trying to keep it straight – and lift it when I was under pressure.

“It’s my first time in Manchester this year and it’s good to be back in familiar surroundings. But sometimes that can be tough – it being too familiar. But it’s good to be playing on the court that all the English guys feel very comfortable on.

“I’m happy with my squash at the moment – probably the happiest I’ve ever been,” enthused the 27-year-old world No7. 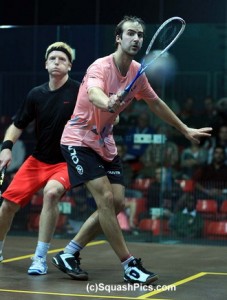 But there was domestic disappointment in the only upset of the day when rising English star Tom Richards went down to German qualifier Simon Rosner in straight games.

Despite numerous clashes at junior level, it was the pair’s first PSA Tour meeting – and only four world ranking positions keep them apart.

“At 9-7 up in the third, I couldn’t help thinking about my first round match in Australia, when I was 2/0 and lost,” explained the jubilant 23-year-old from Paderborn, the German city which hosted last month’s Men’s World Team Championship.

“The Worlds in Paderborn gave me such a big push. And I’ve had some good results lately – but I’ve been around the same position in the world rankings for about 18 months so hopefully I’ll carry this momentum now on the PSA Tour and start to move up again.”

“I felt really good in the first two games, but he slowed down the pace in the third and he took full control in the fourth. I said to myself in the fifth, ‘don’t think about winning, just think about playing the right shots’. I was looking forward to beating him for the first time – I didn’t want to lose three times!

“I’ve changed my fitness coach and have started to play a more attacking game. I had surgery on my left knee in March – and that took me out of the game for five weeks and I was struggling a bit in June,” explained the 22-year-old world No24 from Cairo.

“But I won a $25,000 tournament in Cairo in July and this is now my first tournament abroad. I expect to play Nick Matthew in the next round – and I’m looking forward to my first match against him.” 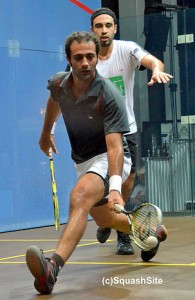 The popular Egyptian fled to USA after the recent riots in Cairo, but returned home a month ago.

“The main reason I went back to Cairo was for Ramadan – it’s the first time I’ve spent Ramadan at home with my family since I was 14,” said the 32-year-old former world number one. “But after travelling for most of the rest of the year on the Tour, I’ll go back to the US in January.

“But I’ve been healthy and trying to do a good form of training – not just running for a hundred metres.

“Playing Hisham in the first round wasn’t ideal, but I’m enjoying being back on the Tour and look forward to the next rounds.”