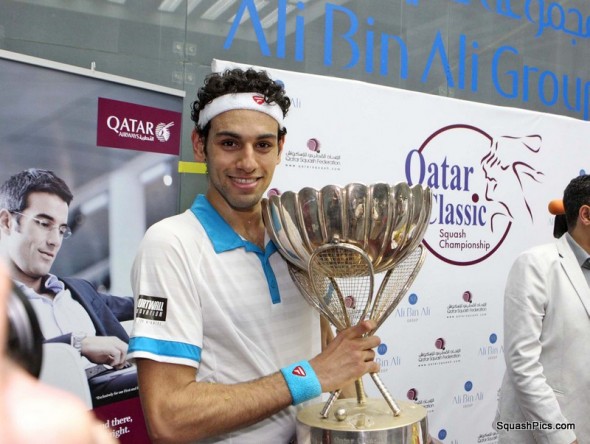 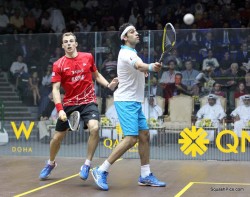 The match had all the makings of a great climax to the seventh PSA World Series event staged before a packed crowd at theKhalifa International Tennis & Squash Complex.

Third seed Matthew, the 33-year-old world No 4, arrived in Qatar fresh from winning a third PSA World Championshiptitle on home soil last week – and reached the Doha final without dropping a game. 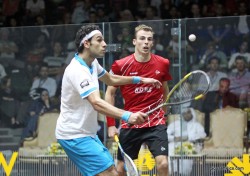 Meanwhile fifth seed Elshorbagy, the 22-year-old world No 6 whose previous visit to Doha saw him contesting the final of the 2012 PSA World Championship, made up for a slow start in the event by upsetting fourth-seeded fellow Egyptian Karim Darwish 3/0 in the semi-finals.

Vociferously supported by the Arabic crowd, Elshorbagy set a blistering pace in the opening game – producing immaculate squash while forcing uncharacteristic errors from the Matthew racket to win the game 11-5.

Yorkshireman Matthew, marking his third successive PSA Tour final appearance, struck back in the second – winning five points in a row from two-all while the Egyptian introduced the first errors of the match into his game! 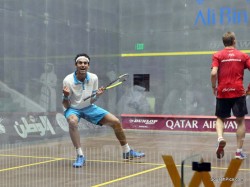 Matthew took the game to level the match, and scored a succession of winners in the third game to move 6-2 ahead.

But suddenly the tables turned and Elshorbagy took control: the fired-up former world junior champion from Alexandria reeled off nine winners in a row to close out the game and regain the lead.

Elshorbagy continued the rout in the fourth – continuing his winning run for a further two points before an error finally returned the initiative to the Englishman. Matthew led 6-4 before Elshorbagy drew level. A massive rally which took Matthew to 8-6 clearly took its toll on the young Egyptian as the Sheffield star went on to take the game and again level the score.

The decider saw Matthew move 3-0 ahead, then Elshorbagy come flying back to open up a 5-3 lead before a broken string to the Egyptian’s racket saw Matthew claw back a single point. 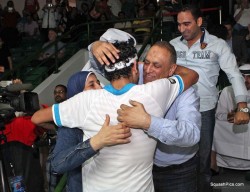 But, armed with a new racket, Elshorbagy was unstoppable – holding serve through to match-ball at 10-4 before clinching the title with a trademark back hand volley into the right wall nick! 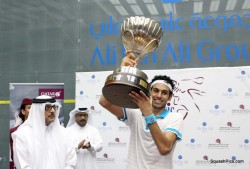 On Matthew, Elshorbagy said: “He’s just won the world title for the third time at the age of 33 years old. If I can do just half of what he has done, I’d be happy.

“To beat him today is such an honour.

Matthew also had praise for the new champion: “It was a great performance from Mohamed,” said the former world No 1.

“When he grows up, he’s going to be a great player,” joked the runner-up.