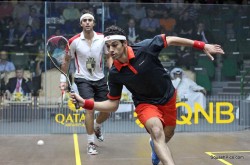 Emphatic straight games wins in the semi-finals of the Qatar Classic in the Qatari capital Doha will see Egypt’s fifth seed Mohamed Elshorbagy and third-seeded Englishman Nick Matthew contest the climax of the seventh PSA World Series squash event of the year at the Khalifa International Tennis & Squash Complex. 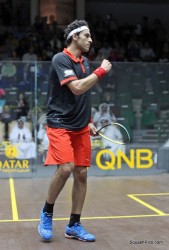 In fact the score was remarkably similar to 22-year-old Elshorbagy’s win over his illustrious Egyptian team-mate – twice a Qatar Classic title winner – when the pair met in last December’s World Championship quarter-finals in Doha.

“I was really looking forward to playing the semi today. I was confident I could do it – and that was very important to me,” said the world No 6.

“Being in the final after a 3/0 win will mean that I am fresh tomorrow,” added Elshorbagy, now in the 14th PSA World Tour final of his career.

Elshorbagy made a sensational start – quickly reaching match-ball at 10-2 before Darwish mounted a fight back.

“I started getting really nervous – thinking ‘oh my god I’m going to lose this game’,” said Elshorbagy when asked what his feelings were at that point. “If I had lost that game, I’m not sure how I would have handled it. But luckily he made the error at 7-10. 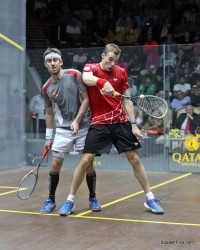 World No 4 Matthew, fresh from his huge success in last week’s World Championship on home soil, took on giant-killer Borja Golan, the seventh-seeded Spaniard who stunned top seed Gregory Gaultier in the previous round to earn a place in his first World Series semi.

“It was 3/0 – but it was tougher than the score suggests,” said Matthew afterwards. “The first half of each game was tough and I was pleased with how I finished each game – I played good squash at the end.” 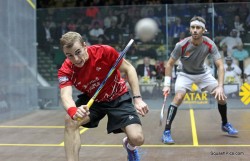 When asked about the pressure, coming into the event as World Champion, Matthew responded: “I’m really proud of my efforts this week – I’m pleased with how I’ve backed up.

“I could easily have come here and lost first round. But I want to go all the way.”

Golan tweeted later: “Really good week in Qatar. Today @nickmatthew was too strong for me and he dominated well the match. Tonight flight home, see u next year Doha!”

Matthew is celebrating the 57th PSA Tour final of his career – and his third in a row.