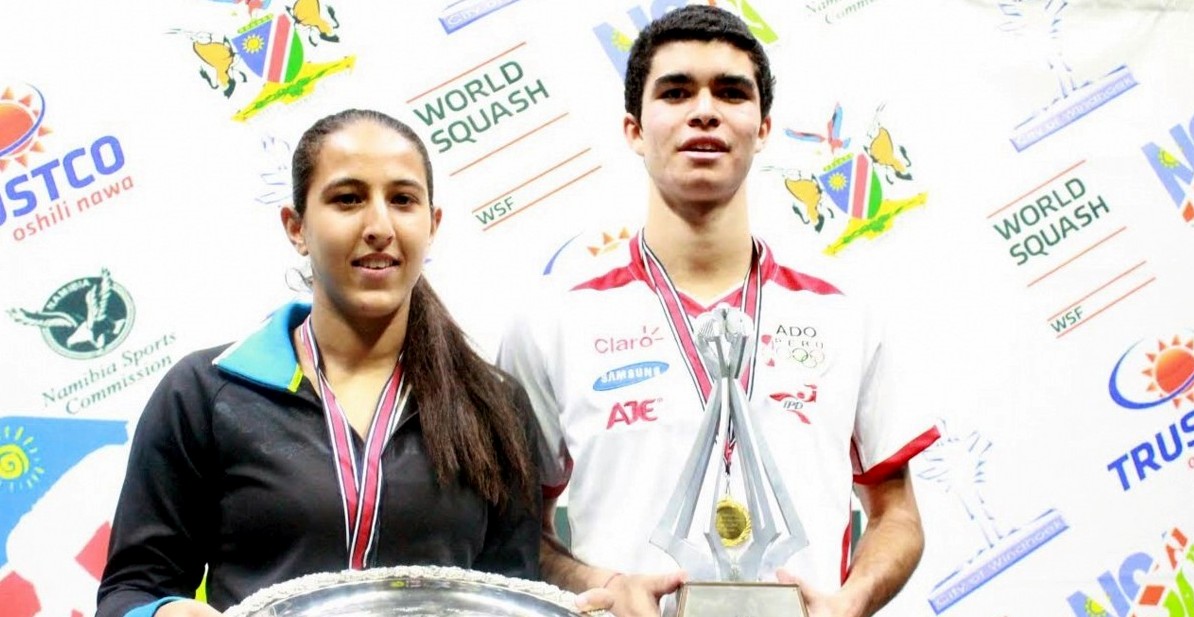 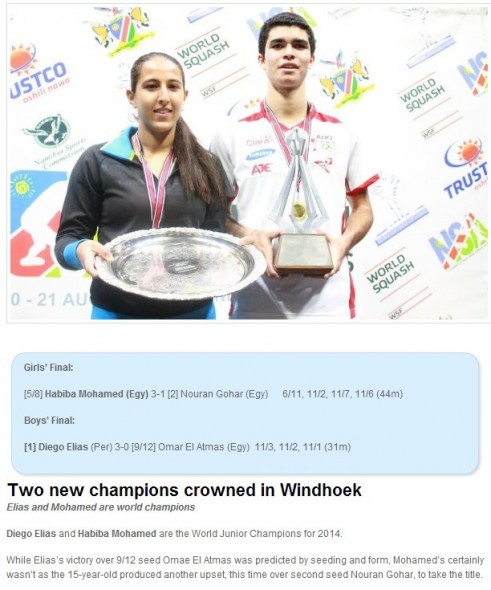 The 2014 WSF World Junior Squash Championships came to a resounding climax at the Wanderers Sports Club in the Namibia capital Windhoek when 15-year-old Egyptian Habiba Mohamed Ahmed claimed her third upset in as many days to become the second youngest ever winner of the women’s title, and Diego Elias made history by winning the men’s trophy to become Peru’s first ever World Squash Champion.

Elias, the 17-year-old top seed from Lima, brushed aside surprise final opponent Omar Elatmas, a 9/12 seed from Egypt, 11-3, 11-2, 11-1 in 31 minutes to win the men’s title without dropping a game – the first player to achieve this feat since England’s former world No1 James Willstrop in 2002. 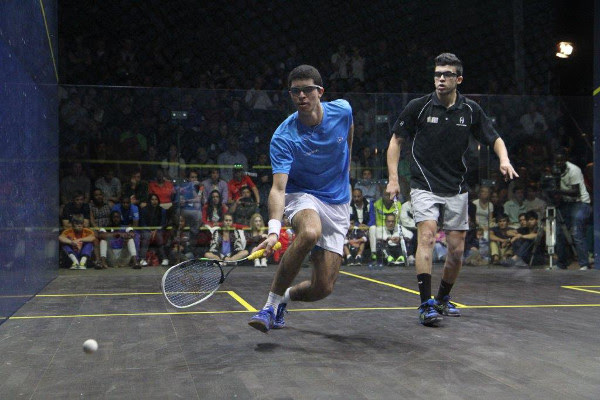 “This is a wonderful victory,” admitted Elias (pictured above in action with Elatmus) later. “It was not as difficult as the semi-finals, but all I can say now is that I am going to celebrate in style!”

Elatmus, an 18-year-old from Cairo, reached the final against expectation after surviving testing encounters in the previous two rounds lasting 76 and 111 minutes.

“I really understand that he was tired as he had a tough few matches before the final and I will also not say my victory was easy,” added Elias. “He fought hard and tried his best, but I kept my composure and just focused on doing the basics right.”

The Peru star also added that his semi-final match against India’s Kush Kumar was tougher than the final: “But I was carried by my fitness and all thanks to my dad and coach (Jose Manuel Elias) who put me through the paces.”

Seemingly unaffected by this mighty 94-minute achievement, Mohamed battled back from a game down in the final to beat second-seeded compatriot Nouran Gohar 6-11, 11-2, 11-7, 11-6 in 44 minutes. “I celebrated the win over Nour in the semi-finals – and winning the final is even a greater reward,” said the new women’s champion (pictured above in action with Gohar) later.

“I am thankful for that, but I’m looking forward to the next tournament in Malaysia,” added the Alexandria youngster who is aiming to qualify for next week’s WSA World Series Gold CIMB Malaysian Open Championship.

Attention at the Wanderers Sports Club now turns to the Men’s WSF World Junior Team Championship – in whichEgypt have been named as top seeds, bidding to win the biennial title for the third time in a row.