It was an Egyptian double for Raneem El Weleily and Tarek Momen in two dramatic CIMB Malaysian Open finals at The Curve shopping mall in Kuala Lumpur. 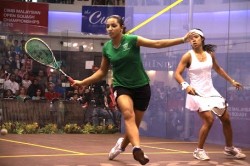 Raneem El Weleily claimed an historic win over top seed Nicol David to prevent the number one seed from achieving her eighth title in the CIMB Malaysian Open final.

The world No.2, who beat Low Wee Wern, Alison Waters, Omneya Abdel Kawy and qualifier Vanessa Raj on her way to the final, showed no fear coming up against David and demonstrated a cool head by finishing off a tiebreak first game despite previously holding three game-balls.

Although the rallies stayed close and the points spread closer, David inched her way back into the game and after another tiebreak in the second game was able to stretch the two point lead needed to draw level.

After dropping games to Donna Urquhart, Annie Au and Laura Massaro en route to the final, David responded in each by upping the pace and dominating the remainder of proceedings.  El Weleily ensured that was not the case on this occasion with a run of blindingly accurate drop shots, whilst absorbing the world No.1’s counter-attacking efforts by confident volleying from the middle of the court.

A strong 11-6 win for the Egyptian left the Malaysian crowds wondering what David would have to do to regain a foothold in the match.  As the fourth game commenced, the signs were clear that the 23-year-old Egyptian had her sights set firmly on the title and she closed out the fourth game 11-2, inflicting David’s heaviest game defeat since 2007.

A spectacular all-round performance from the Egyptian means that David will have to wait until the end of the month to attempt to break the long standing record for most WSA titles won, as she currently sits level with women’s squash great, Sarah Fitzgerald.

A milestone fifth WSA title for Raneem El Weleily, in her second month as world No.2, unquestionably strengthening her position in the rankings and laying down the gauntlet for those ranked not only below her, but to the one remaining player yet to catch. 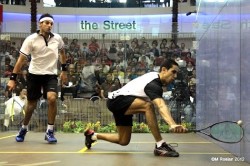 Saving two match-balls in the dying stages of the game, unseeded Tarek Momen overcame second seed Mohamed El Shorbagy in today’s first ever all-Egyptian final of the CIMB Malaysian Open to win at the Curve Shopping Mall in Selangor in dramatic style – and claim the biggest title of his career.

The 24-year-old from Cairo had only beaten world No8 El Shorbagy once before in his career – in the semi-finals of the 2010 Malaysian Open!

And Shorbagy led his close friend in the opening game before underdog Momen, ranked 11 places lower, won it on a tie-break.

But Shorbagy drew level after the second – and led 10-6 in the third before Momen found a run of six points to again take the game on a tie-break.

The positions were reversed in the fourth where Momen led – only for Shorbagy to reclaim the advantage and again draw level to force a decider.

“In the fifth, it was close all the way and both players were getting more and more frustrated as the decisions of the referees don’t seem to be consistent,” said event spokesman Andrew Cross.

“Tarek reached game ball first but couldn’t convert. Shorbagy had a chance to win and probably should have had a stroke but not given as Tarek never looked back and went on to win the fifth for his second title in two weeks.”

He praised El Shorbagy in his post-match interview: “I hope we can make it to the top five together,” said Momen, clutching the biggest trophy of his career.