Top seed El Shorbagy dropped the first game after a series of unforced errors, but took control of the second to draw level.

The 20-year-old from Alexandria, competing in his first event in Colombia, moved ahead after winning the third, but again lost concentration in the fourth as second seed Anjema forced a decider.

“The final game was highly emotional,” said event spokesman Juan Carlos Santacruz. “Crowd favourite Anjema came onto the court cheered by the tribune. Winning shots and unforced errors were committed by both players looking for precision.”

A downcast Anjema said: “Losing a final so close in the fifth is painful. It hurts a lot. But at the same time I cannot be that frustrated because I feel I put in a good performance and I hit a bit of bad luck in the end. This invisible coin in life sometimes falls your way and sometimes the other way. Today was Shorbagy’s way. We played hard and fair and although I lost today, I enjoy playing well.”

El Shorbagy was celebrating his third PSA Tour title success of the year – and his second in a row after surviving a 15-13 fifth game: “What can I say after this brutal match. I came into this match knowing he had an advantage over me as he trained in the high altitude this summer so I needed to play clever squash to overcome that. 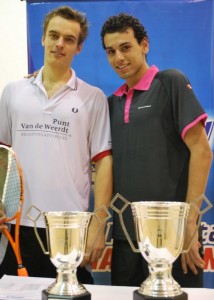 “In the first game he was just too good for me. When it came to 1/1 and 8-8 we were both absolutely dead at that time and I knew this game would make a lot of difference so I gave it a big push. And the fourth, I didn’t try – I just thought I would take the risk and save my energy for the fifth.

“This is actually the first time I have left a game, but I guess that’s what the altitude can do to you. We both just gave it all in the fifth and when I was 9-5 down, I just didn’t want to give up – I wanted to win so badly, so I gave a huge push and kept telling myself I need only six points and I can do it.

“He had only one match point and I had all the rest – and every time I was match point up he used to hit a stunning winner. He is such a great guy and such a great player that was our first meeting and I’m sure we’re going to have a lot of more hard matches. The way he takes the loss only champions can take it that way.

“I loved the place here – it was just amazing and it was such a great experience to play in the high altitude,” concluded the new champion.