Egypt’s Mohamed El Shorbagy celebrated a career-first win over senior fellow countryman Karim Darwish in the quarter-finals of the Punj Lloyd PSA Masters when he upset the No2 seed in four games to reach the semi-finals of the ninth and final PSA World Series squash event of the year at the Siri Fort Complex in the Indian capital New Delhi.

The 20-year-old from Alexandria has made massive strides on the PSA World Tour this year – but in four meeting in almost three years with Darwish, the former world No1 currently ranked five in the world, El Shorbagy had only previously taken one game.

But, despite difficulties in shaking off jet-lag since arriving in India, El Shorbagy was in masterful form against his experienced 30-year-old opponent – winning 11-9, 8-11, 11-5, 11-3 in 60 minutes to reach his second successive World Series semi-final.

El Shorbagy admitted afterwards that his reaction was a mixture of delight and sadness, as he had a great deal of respect for Darwish, who had been very helpful to him earlier in his career.

This late success in the year – in only his fifth appearance in a 2011 World Series event – has put El Shorbagy in touching distance of a place in January’s ATCO PSA World Series Finals in London. But the youngest player in the world top 30 needs to win the title to guarantee a top eight place in the World Series standings, and therefore a place in the draw at Queen’s Club. 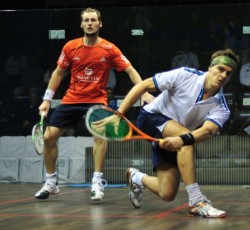 Sixth seed El Shorbagy will now face Gregory Gaultier, the fourth seed from France who was in sparkling form to beat eighth seed Laurens Jan Anjema 11-5, 11-2, 11-5 – and deny the Dutchman a top eight finish in the PSA Word Series Standings.

The other semi-final will be an all-English affair between third seed James Willstrop and Londoner Peter Barker, the fifth seed.

Willstrop, the man in form with title triumphs in the previous two World Series events in Hong Kong and Kuwait, faced fellow countryman Daryl Selby, the No7 seed from Essex against whom he has not lost a Tour match in seven meetings since January 2007.

But the underdog from Brentwood has also rediscovered his form of late – and pushed his higher-ranked England team-mate all the way in a hard and intense battle on the all-glass court in India’s 2010 Commonwealth Games venue.

Selby showed enormous courage to come back from two games down to take the third. The 29-year-old world No16 then demanded the very best from his opponent in the fourth before Willstrop emerged triumphant 11-7, 11-7, 9-11, 11-5 after 65 minutes – with Selby diving for the ball twice in the very last rally before finally conceding defeat.

“I knew it was going to be tough and dogged,” said Yorkshireman Willstrop. “He’s extremely tough. 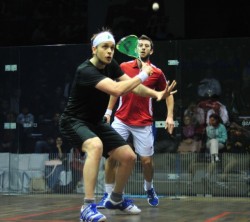 Willstrop’s quarter-final success ensures that he will finish at the top of the 2011 PSA World Series Standings, knocking fellow Yorkshireman Nick Matthew, the world number one, into second place.

Ashour was making his return to the PSA Tour after a hamstring injury – and looked strong throughout the first game. But soon into the second, it was clear that all was not well with the 24-year-old from Cairo, as his movement became impaired.

After losing the second, it seemed likely that the former world number one would concede – but Ashour refused to give in and manfully contested the following two games before Barker claimed victory. 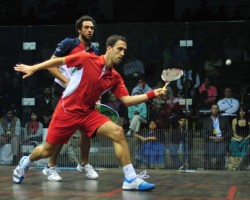 “He nearly beat me on one leg,” joked Barker in his post-match interview. “Ramy’s a phenomenal player so I hope he’s not done any real damage today.”

Barker and Willstrop have played each other countless times since their junior days – but the Londoner has only achieved one win in 17 Tour meetings since 2003.

“We’ve played each other a lot this year,” added Barker, who is celebrating his first World Series semi-final appearance since the PSA Masters two years ago. “But I’d like to think I’ve learned a lot from those meetings so I’m looking forward to tomorrow.”