In only his third ever appearance in the championship, Egypt’s 19-year-old Mohamed El Shorbagy reached the quarter-finals for the second time when he beat Pakistan’s Aamir Atlas Khan in the third round of the $327,500 Saudi PSAWorld Open Squash Championship, the richest PSA World Tour event of all-time at Sunset Beach Resort in the Saudi Arabian city of Al-Khobar.

Before a packed crowd – dominated by Egyptian supporters but with a significant Pakistani faction – the No13 seed from Alexandria took just 33 minutes to overcome his opponent 11-8, 11-6, 11-8. Khan, the 22nd seed from Peshawar, secured his place in the last 16 after the injury retirement of world number one Ramy Ashour midway through their second round match. 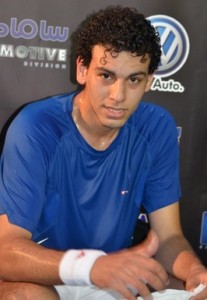 “When I went onto court, I’d never seen or played in front of a crowd like that, I was so nervous,” said El Shorbagy, the event’s youngest seed who made his mark in the championship debut in England in 2008 when he reached the last eight as a 17-year-old.

“At 4-0 down, I told myself I just had to ignore it and start playing my own game. Once I got into the match, the crowd became more of a support than a pressure, and I started to really enjoy it.

“I’d talked with Jonah [Barrington] about how to play him, and knew that if I kept the pace fast enough he wouldn’t be able to cope with it, and that if I got ahead it could get to him.

“I’m so pleased to be in the quarters of the World Open for a second time. When I saw the draw I thought ‘oh my God,Cameron Pilley second round then Ramy’, but they’re both out! I feel sorry for them, but it’s an opportunity for me and I have to take it,” explained El Shorbagy, who is a University student in Bristol in the UK. 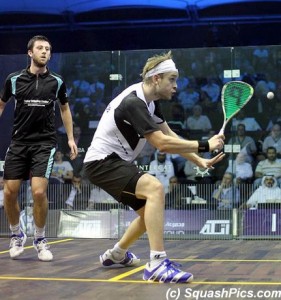 The youngster will now face England’s James Willstrop, the sixth seed who survived the longest match of the day in overcoming England team-mate Daryl Selby, the 9th seed, 11-8, 7-11, 11-9, 11-7 in 80 minutes.

“James is a fair player, a gentleman on court,” added El Shorbagy. “He beat me 3/1 in Kuwait, but we’ll just have a fair and enjoyable squash match tomorrow.”

The English marathon was the pair’s sixth Tour clash – and their third in Saudi in the past three years. But, whilst Willstrop had never before lost to his older opponent, it was the longest that Selby had kept him on court.

“It was a real battle,” said Willstrop. “He gave me little to play with and I had to dig, dig, dig. I was a bit disappointed about that, but perhaps I shouldn’t have been. It’s still good that I could win this way.

“Daryl played so well, I don’t think I’ve ever played anyone as accurate as he was tonight, particularly down that backhand side.” 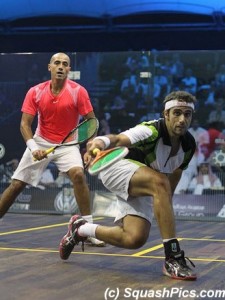 The other quarter-final line-up decided will also throw together an Egypt/England clash – between fourth seed Karim Darwish and Londoner Peter Barker, the No8 seed.

“Everything was good for me today, apart from my drops!” said Barker. “It’s quite satisfying in a way, to be able to win three-nil with some improvements still to make for the next round.

“There’s a lot of pressure out there, it’s the biggest tournament of the year – every round is massive,” added the left-hander. “I’m in the quarter-finals of the World Open, I don’t mind who I play now!”

Darwish, runner-up two years ago, made up for the disappointment of failing to make the last eight last year. “It’s always tough to play Wael,” said the 29-year-old from Cairo. “He’s a determined, talented player and he knows my game well. I knew I had to be focused right from the start of the match, and I’m pleased with how I kept my concentration to win three-nil.

“I have to make sure I’m properly prepared for them, mentally and physically.”