Marwan and Mohamed El Shorbagy, currently ranked nine in the world, are the first brothers in the sport’s history to win world individual titles. 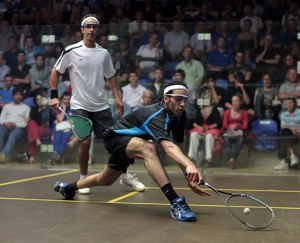 “I’m so happy right now – I’ve been dreaming of this since I’m 10, and when I saw my brother getting his first title in Switzerland, I wanted so much to win too,” explained the new champion to www.squashsite.co.uk at the presentation ceremony. “You know, I had a terrible night last night, I just couldn’t sleep at all.

“This was a very difficult match mentally, as Mohamed and myself are best friends, and we know each other’s game so well, we’ve been playing each other since we were 10,” added the No2 seed.

“There are so many Egyptian world juniors champions, we keep it going, and teach each other the game of squash!!!

“I have one more year to year to go, and next year will be in Egypt, so I so want to win it, because it will be in my own country. But it will be hard..

“How can I thank Jonah (Barrington) – how can I express all of what that man has done for me. I owe him so much. And I would like to dedicate this title to my dad, whose always been there for me. I need to thank my mum for coming here, and being there with me, and supporting me, and my brother Mohamed for being the best big brother ever.”

Abouelghar, who made his breakthrough in the semi-finals where he defeated defending champion Amr Khaled Khalifa, had mixed feelings afterwards: “I’m disappointed with the result of the match, but not with this tournament.

“I didn’t perform at my best today, I was really tired from yesterday, I didn’t have much left in the tank when I started. And he played well, he made the rallies last, and that was not good for me, I just didn’t have enough energy to play again five long games But that’s all part of the learning process.

“I want to congratulate Marwan, he is a great player. But I’ll be back next year!”

Mohamed Abouelghar and Marwan El Shorbagy will contest the final of the WSF Men’s World Junior Individual Squash Championship at the Flemish Squash Centre in Herentals in Belgium in the second successive all-Egyptian final of the World Squash Federation championship in its 18th year. 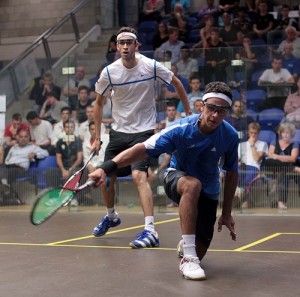 “I’m very happy, but I really cannot really let my emotions out, as there is still tomorrow to play,” said the delighted 17-year-old from Cairo to www.squashsite.co.uk later. “In the beginning, I was over excited, I really went for my shots too early, and made too many errors. Then I started playing serious squash, and I was accurate at the back.

“My dad told me right before the fourth to keep the ball going, that I had nothing to lose, and that’s what I did. I told myself not to make any errors until I reach five. But at 5/2, my mind was too much set on winning, winning, and that led to play too early again.

“This was a match where fitness was really important, so I want to thank my fitness coach, Fery, and my Dad.”

A downcast Khalifa said: “It’s so hard, that pressure, you have to be number one, if you are number two, you are nothing. He played better than me today. I worked so hard in the first game, running after his shots. In the fifth, I didn’t have much left.” 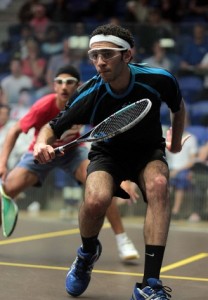 Marwan El Shorbagy is one match away from making squash history by becoming the first brother of any world individual title to become a world champion.

“I spoke with everybody – Mum, Jonah (Barrington), my brother, Ian – and I knew I had to be relaxed today, play squash, not talk to the ref, that’s all I had to do,” explained the exuberant No2 seed.

“I think I played the right game, I didn’t go for silly shots, I was patient, and was waiting for him to make errors, as he goes for a lot of shots.

“He is extremely talented, definitely one of the most talented juniors in Egypt, and I’m pretty sure he’ll put his name on the trophy one day.

“I’m so happy I’m in the final for the first time. Everybody wants the title, I’ll have to be at my 100%, but above everything, I’ll try and play my best squash, and enjoy the moment.”

The final will be a repeat of the 2010 British Junior U17 Open climax, won by El Shorbagy.