Victory over compatriot Mariam Ibrahim Metwally in the final of the World Squash Federation event at the Hasta La Vista Club in the historic city of Wroclaw in Poland sees the 17-year-old from Alexandria extend the previous women’s double record set by the reigning world number one Nicol David in 2001, and the twin-title men’s record established byRamy Ashour – also the current world number one – in 2006. 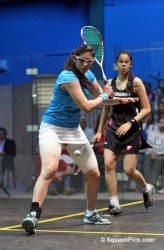 There was an upset in the men’s final – also an all-Egyptian affair – when No2 seed Karim Ayman Elhammamy beat favourite Fares Mohamed Dessouki in four games to keep the trophy in Egyptian hands for the eighth year in a row.

El Sherbini is no stranger to record-breaking achievements in the sport: In August 2009 in India – in her maiden appearance in the World U19 championship – the unheralded 13-year-old swept through the field to become the youngest world champion ever.

And, after winning her second World Junior crown a year ago in Qatar, El Sherbini became the first player to reach a fourth world junior final on Saturday after success in the semi-finals in Wroclaw.

The championship favourite reached the final without losing a game – and faced surprise opponent Metwally, a 5/8 seed to whom she had dropped a game in the 2012 quarter-finals.

Metwally, a year younger than Sherbini, had reached her maiden final after upsets over No2 seed Nouran Ahmed Goharand last year’s runner-up Yathreb Adel, a 3/4 seed. 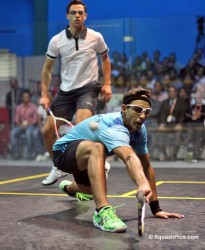 The men’s final brought together the event’s top two seeds – with top-seeded Dessouki not only boasting a world ranking more than 200 places above his opponent, but a victory over Elhammamy in January’s British Junior U19 Open en-route to winning the prestigious title.

But, in a fittingly dramatic climax to the world individual championships in Wroclaw, underdog Elhammamy clinched the title 11-8, 11-6, 6-11, 13-11 after 83 minutes.

“I’ve seen a lot of squash: PSA, senior team event, everything. But this – this was just something else,” said the Poland Team coach Marcin Kozik afterwards. “These boys flew around the court. What they did there tonight was crazy and I absolutely loved it!”

For all the latest news, visit the official event website: hastalavista.pl/wjc-2013/strona-glowna-2