For the second successive year, all-Egyptian finals will bring to a climax the Doha WSF World Junior Squash Championships – after Yathreb Adel upset England’s No2 seed Emily Whitlock in the women’s semi-finals of theWorld Squash Federation event at the Khalifa International Tennis & Squash Complex in the Qatar capitalDoha.

The match was interrupted when 3/4 seed Adel – leading 11-8, 9-7 – collided with her English opponent, leaving the second seed needing time to recover. 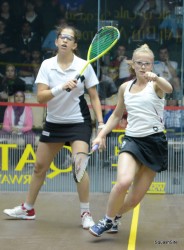 On the resumption of the match, it was Whitlock who secured the first two points to draw level – but, after missing game ball at 10-9 and saving one at 10-11, it was the Egyptian who took it 13-11 to double her advantage.

Whitlock held a slender lead for the early part of the third game, but from six-all 16-year-old Adel assumed the ascendancy to take the match 11-8, 13-11, 11-7 and guarantee two Egyptian champions. 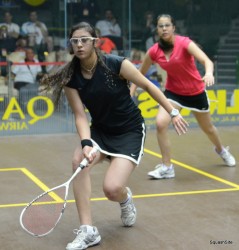 Earlier, top seed Nour El Sherbini claimed her place in the women’s final for the third time in four years – but the hot favourite dropped her first game in the championship as compatriot Mariam Ibrahim Metwally put up a real fight after scoring just two points in the opening game.

“Mariam played very well, we are from the same country, the same club, she is a friend, and it’s difficult to play against a friend,” said El Sherbini, already ranked seven in the world. “She is an up-and-coming player, and I think that next year she’ll be very dangerous indeed.” 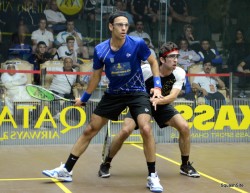 Men’s top seed Marwan El Shorbagy followed his female compatriot into the final after overcoming his third successive Pakistani opponent. The defending champion thought he had taken a close first game 11-9 against 3/4 seed Danish Atlas Khan, but was called back onto court after his final ball was called down.

El Shorbagy went on to take the game 12-10, then pulled away from seven-all in the second to extend his lead.

Khan rallied to take the third with some ease but the Egyptian recovered to take the match 12-10, 11-7, 5-11, 11-4 to move within one match of emulating his older brother Mohamed in winning the title twice.

“Danish is a great player, I played him in the British Junior Open, I was expecting a tough match, and it was,” said Marwan. “This title is everybody’s dream, and I’m one step away from living it for the second time.” 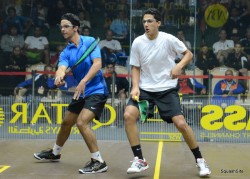 And for the second year in a row, El Shorbagy will face fellow countryman Mohamed Abouelghar in the final.

“I wasn’t in the match really for the first two games, but slowly, slowly, my body started to get better,” said the delighted and relieved winner.

“I’m in the final, again, against Marwan, again,” added Abouelghar. “I don’t have any expectations for tomorrow, I’ll just enjoy my squash, my last junior event, and hope it ends the right way.” 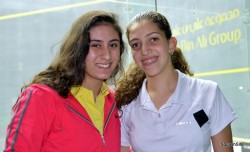 Unsurprisingly, Egypt were confirmed as top seeds for the Doha WSF Men’s World Junior Team Championship which will follow the individual championships. The title-holders are expected to face second seeds Pakistan in the final for the fifth time in a row.