A dramatic day of quarter-final action in the WSF Men’s World Junior Individual Squash Championship in Belgium has led to an all-Egyptian semi-final line-up at the Flemish Squash Centre in Herentals.

It is the first time that one country has dominated the last four of the World Squash Federation event since England achieved the feat 21 years ago. 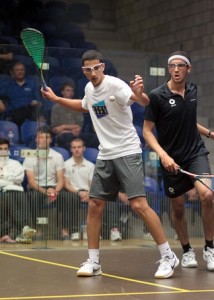 “In the first game, I was really scared – to the point of feeling dizzy,” explained the 17-year-old from Cairo to www.squashsite.co.uk later. “And Declan played really well in that game. I’m happy that I train very hard with my fitness, because I needed it to pick up all his shots!

“After the first game, I calmed down, and was able to concentrate on my shots, so I gradually played better.”

James, who arrived in Belgium fresh from success earlier in the month in the Pioneer Junior Open in Germany, admitted that he had not been playing at full strength: “I should have been 100% to be able to beat him today, but I was only 70%, as I strained my hamstring yesterday playing against Dylan,” said the 18-year-old from Nottingham.

“How to beat the Egyptians? I think that Nick Matthew showed us the way. I don’t think our juniors have got that winning instinct that the Egypt juniors seem to have from a very young age, their ability to fight for every single shot. We seem to catch up gradually as we get older, but it’s a bit too late by then most of the time.

“Mazen is a perfect example of how talented Egyptians players can be. He has an exceptional talent, and he showed tonight what he can do. And it was close – but not close enough.” 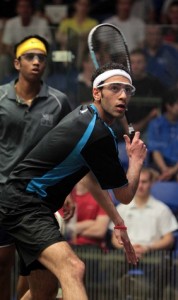 “I was really nervous from the start, and to be honest, I can’t remember what happened on there, only that I nearly lost, and that I’m glad I won,” explained El Shorbagy, the 17-year-old brother of two-time champion Mohamed El Shorbagy. 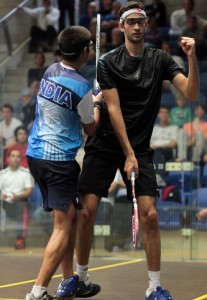 “Too much pressure I think, I’m not sure why – I guess I put the pressure on myself. And also, all the players, when they play me, they have nothing to lose – and they play their best squash. And Mahesh played really well today.”

Bidding to become only third player in history to win the title for a second time, Khalifa will now face Cairo compatriotMohamed Abouelghar, who beat fellow 5/8 seed James Earles, of England, 11-8, 11-9, 11-7.