The final of the Qatar PSA World Squash Championship will be an all-Egyptian affair for the third time in the last five years after underdogs Mohamed El Shorbagy and Ramy Ashour triumphed against higher-ranked Englishmen in today’s semi-finals of the premier PSA World Tour championship in Doha.

Boasting a $325,000 prize-fund, the second biggest in the sport’s history, the Qatar PSA World Championship is being hosted by Qatar for the third time and being held at the Khalifa International Tennis & Squash Complex. 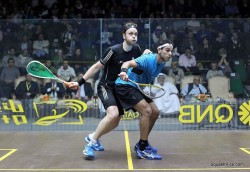 El Shorbagy, aged 21 and the youngest player in the world top 25, faced top seed James Willstrop in the opening semi-final. The 29-year-old world number one from Leeds boasted a 7/1 career head-to-head record over the young Alexandrian – but had been stretched to five games in a 90-minute US Open clash only two months ago.

It was one-all after 46 minutes – and it took a further 34 minutes to resolve the third game, El Shorbagy taking it 14-12 after his third game-ball. 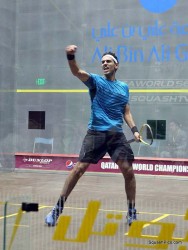 But the experienced Willstrop, eager to win the title for the first time, battled back from 2-4 down in the fourth to draw level.

“Before anything I want to hug my mother,” the eighth seed told event MC Robert Edwards (in Arabic) before charging off the court and into the arms of his weeping mother. The crowd shared the emotional moment as he also went to his brother and his father.

Willstrop went into the match knowing that even winning the title would not be enough to enable him to retain the world number one ranking he has held for all but one month this year.

“I didn’t quite get it right,” admitted the Yorkshireman about the match. “He was hitting with purpose and ferocity.

“I am as strong as anyone in the world but I felt like there was a slight drop in intensity. I haven’t had a session like that for a while.” 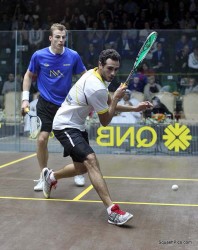 Dramatic though the opening match clearly was, the second semi-final offered not only the chance for the winner to reach the final, but also to inherit the first world number one ranking of 2013.

Ashour, the fifth seed and champion in 2008, lined up against title-holder Nick Matthew, the world number two from England who was bidding to become the first player since Pakistan legend Jansher Khan to win the world title three times in a row.

The Cairo-based Egyptian (pictured below with Matthew) last topped the world rankings for nine months in 2010, before Matthew succeeded him to reign supreme throughout 2011. 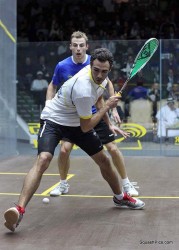 The match lived up to expectations: Ashour, 13/7 ahead on career meetings and winner of their two most recent clashes, took the first two games – but the reigning champion fought back to reduce the deficit.

“I’m on top of the world!” Ashour told www.squashsite.com afterwards.

“He was the world champion, probably the fittest guy on the tour,” added the 25-year-old. “It was not easy to beat Nick tonight.”