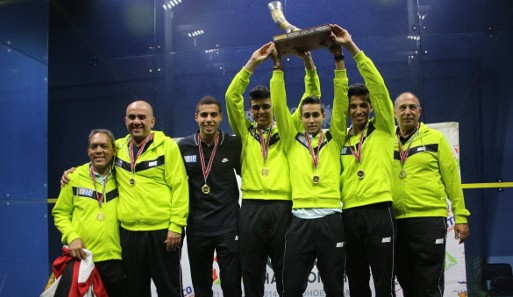 Egypt retained the WSF Men’s World Junior Team Squash Championship title for the third time in a row after beating Pakistan 2/0 in the final of the biennial World Squash Federation championship being staged at the Wanderers Sports Club in Windhoek, the capital of Namibia.

But the favourites were pushed all the way by the second seeds in the sixth successive final between the world’s two powerhouse squash nations – Egypt’s eventual triumph equalling the five-title record of Australia, the event’s first champions in 1980. Egyptian number one Omar El Atmas put the defending champions into the driving seat with a 12-10, 12-10, 6-11, 11-8 victory in 74 minutes over Tayyab Aslam (pictured above, foreground, with El Atmas). It was a repeat of the 18-year-old from Cairo’s quarter-final upset over the top Pakistani junior in the preceding world individual championship – which ultimately led to Elatmas reaching the final, as a 9/16 seed. Arguably, however, the event’s heroes were Spain. Seeded sixth and appearing in the championship for the first time since finishing in 20th place in 2008, Spain followed up their quarter-final upset over 4th seeds India by beating Malaysia, the fifth seeds, 2/0 in the play-off for third-place – thereby outclassing their previous best finish of fifth in 1998.

Four-time champions England made up for the shock of losing out on a semi-final place for the first time in the 34-year history of the event by securing fifth place – but the third seeds were taken the full distance before overcoming India 2/1.

Plaudits also go to Ireland, the No8 seeds who beat Finland 2/0 in the play-off for seventh place to achieve their highest finish in the championship for 32 years!

Meanwhile, Finland’s eighth place is also their best finish since 1994.

12th seeds USA also outperformed their seeding by finishing in ninth place following a 2/1 victory over Israel. But Israel, the 11th seeds, were making only their second ever appearance in the championships – having finished in 16th place in their 1988 debut!

Host Namibia celebrated their first appearance in the championship by finishing in 22nd place – ahead of fellow debutants Botswana.