In today’s fifth successive meeting in the climax of the biennial World Squash Federation event, it was favourites Egypt who again triumphed over second seeds Pakistan in the final of the Doha WSF Men’s World Junior Team Squash Championship at the Khalifa International Tennis & Squash Complex in the Qatar capital Doha to retain the title. 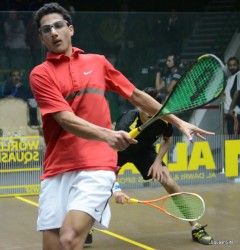 First up was Egypt’s Mazen Hesham Ga Sabry, an individual quarter-finalist, against the younger of the two Bokhari brothers in the Pakistani squad. Syed Ali Shah Bokhari made a great start, taking an early lead and winning the first game, but once his Egyptian opponent found his range he became increasingly dominant as he took the next three games to give Egypt the lead 7-11, 11-8, 11-5, 11-6. 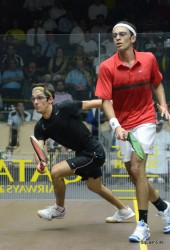 Again the Pakistani made a good start, but Shorbagy patiently pegged back the early lead, then closed out the game from nine-all. As in the earlier match, the tide flowed the Egyptian way thereafter, Shorbagy seemingly having the answer for everything Iqbal tried as he won 11-9, 11-7, 11-6 in 39 minutes to keep the world team title in Egyptian hands. 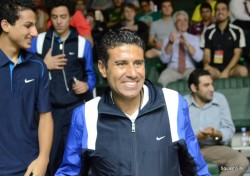 “This is our second title in a row,” said a delighted Egyptian National Coach Amir Wagih. “Both the players today played really well – Mazen played a solid match and Marwan played a perfect match!

“Those two tournament titles, both individuals and team event, are very important for Egypt. The two weeks have been long, the team has done a fantastic job, well done to them.

“We promised we would come back to our country with the cups, and that’s what we are doing. I’m so proud of my team!”

The result sees Marwan finishing his junior career on a high – and the 18-year-old from Alexandria was naturally delighted: “I’m so happy Egypt has won the title again, and as for myself, winning this title again, with a different team, is such an honour. We’ve been working hard to be able to have such a result, and it’s a small gift we are making for our country.

“Today, I played my best squash at last, I must have relaxed a bit, and when you are representing and playing for your country, it’s a completely different thing. I’m so happy we get to keep this title in Egypt, and so proud I was able to win two individual titles too.

“We would like to thank our Federation, for the support they are giving us, and our National Coach Amir – and of course the Qatari Federation for organising this superb event, for the welcome they offered us, and for the hard work the Qatar Team has produced these two weeks. Thank you, Qatar!” 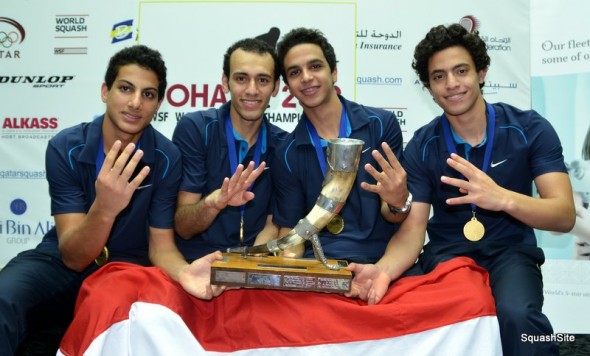 The opening tie on the glass court saw India claim their highest-ever finish after upsetting third seeds and former championsEngland 2/0. 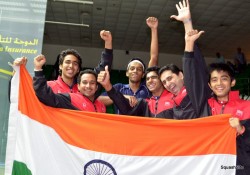 “We’ve done today what no other Indian men’s team ever done before,” said an ecstatic Indian national coach Cyrus Poncha. “And this is also the first time ever a men’s team has beaten England.

“It was an outstanding performance. We have had great teams in the past – notably our 2004 and 2008 teams – but this team has eclipsed them all. It is truly a proud moment for Indian squash.” 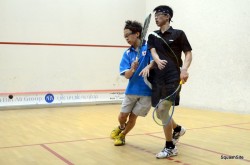 Elsewhere in the playoffs, Japan lost out to Asian neighbours Hong Kong China in the play-off for fifth place – Hong Kong’s highest finish – but 13/18 seeds Japan will go home on the back of a massive best-ever performance.

Brazil lost out to Germany in the play-off for 11th place – but will be delighted with an unexpected best-ever 12th place finish – while Iraq and hosts Qatar can reflect well on maiden appearances that saw them finish strongly, in 21st and 19th places, respectively.