Favourites Egypt successfully retained their title in the WSF Women’s World Junior Team Squash Championship inBoston – but hosts USA, celebrating their first appearance in the climax, forced the tie into a decider after former world individual champion Amanda Sobhy defeated the newly-crowned champion Nour El Tayeb on the final day of the World Squash Federation event at the Murr Center at Harvard University.

Defending champions Egypt made a great start to the final as Nouran El Torky beat a nervous Sabrina Sobhy 11-9, 11-3, 11-3. 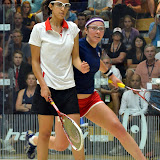 Then came the match that was expected to bring the earlier individual championship to a conclusion – between 2010 champion Amanda Sobhy and her predicted successor Nour El Tayeb. Sobhy, determined to make amends for her shock semi-final exit in the individual event, edged a tight first, pulling away from eight-all.

El Tayeb drew level – but New Yorker Sobhy ran away with the third to retake the lead.

“Amanda played so well, she hit the ball very hard and made no mistakes,” El Tayeb told the official sitewww.worldsquash.org/worldjuniors2011 afterwards. “It was in my mind that in 2009 she’d beaten Nour (El Sherbini) in the team event and today she beat me.

“Even though I played my best, I tried my hardest. I had some nerves, it was a different kind of nerves from the individual event, but it didn’t help that she played so well!” 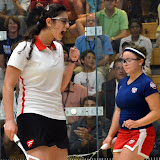 “When Nour lost I was quite nervous, I knew it was all on me now, but once I managed to take the first game I though everything’s alright now,” explained El Sherbini.

“Then I hurt my ankle and had to get it strapped,” added the 15-year-old. “Everyone was concerned but I told them I would be ok. Once I went back on court my ankle didn’t hurt, but I wanted to finish the game quickly and most of my shots came off,

“I was so happy to help the team win, but my ankle does hurt now!”

Egypt coach Amir Wagih added: “It was a great team victory and a very special one. They’ve been working hard in the camps all summer and this is a great reward for them. 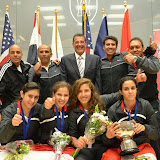 “The team event is always tougher than the individual, all the other countries are determined and trying to push you, and all our players played right to the end of the individuals so there wasn’t much time for rest.

“I promised we would try to bring the trophy back home and they did it, I’m so proud of them.

“The boys did so well in Belgium, now the girls have won again. This is the 20th world title since I’ve been National Coach, and soon the men will go to Paderborn and we will try to retain that title.”

In the bronze medal play-off for third place, sixth seeds Hong Kong China beat India, the third seeds, 2/1 – and former champions England improved on their finish two years ago by beating fifth seeds Malaysia 2/0 in the play-off for fifth place. 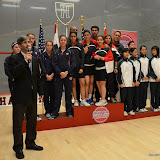 And although New Zealand beat Wales 2/0 in the seventh place play-off, the eighth place finish was the best by Wales since their appearance in the inaugural championship in 1985.

In the battle for 15th place between championship debutants Guyana and Ecuador, it was Guyana that emerged triumphant 2/0.