Top seeds Egypt and Pakistan will meet in the final of the Doha WSF Men’s World Junior Team Squash Championship at the Khalifa International Tennis & Squash Complex in the Qatar capital Doha to contest the climax of the prestigious biennial World Squash Federation event for the fifth time in a row. 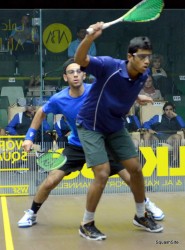 In the second match, Egypt had the luxury of being able to play Mohamed Abouelghar, the world’s number two junior, who contested the last two world finals with fellow countryman El Shorbagy.

Again it was the Indian camp who were happier at the start as Abhishek Pradhan took the first game, and also made the second a tough one for his Egyptian opponent to win.

“We are so happy to be in the final,” Egyptian coach Amir Wagih told the event website www.wsfworldjuniors.com later. “India played a really good match, they woke up my players who didn’t have much fight up to then!” 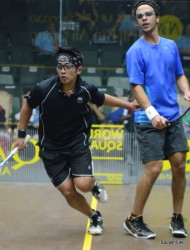 Indian coach Cyrus Poncha was delighted with his team’s performance: “Great heart from our players. They went out there and showed we are nearly there. Mahesh was outstanding, and played to the game plan, but unfortunately, in the fifth he couldn’t keep the consistency. But he did play very well, and we are very proud of him.

“And the same for Abhishek, he gave Abouelghar a good run, and played some outstanding winners, very proud of him too.” 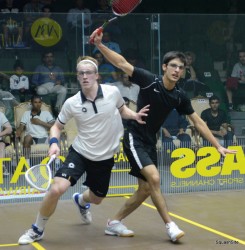 Second seeds Pakistan made a great start to the second semi-final against England, the No3 seeds, as Nasir Iqbalestablished a 7-0 first game lead against Ollie Holland.

The second match was closer, with Thomas Ford pushing the Pakistani number two Syed Hamzah Shah Bukhari, the older of two brothers on the Pakistani team. 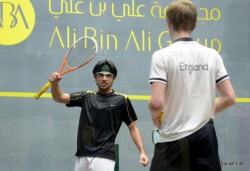 The win takes former champions Pakistan through to their sixth successive final – and fifth in a row with Egypt, with whom they have shared the title with two wins apiece since 2004.

The standout performance of the day, however, came from Japan, who beat sixth seeds USA 2/1 in a thrilling climax to a 5/8 place play-off. Competing in the event for only the third time – and never having previously progressed beyond 16th place – the determined Japanese squad has already far exceeded expectations, and now face fifth seeds Hong Kong China in the play-off for fifth place.