England’s world number two Jenny Duncalf secured her anticipated place in the last four of the Women’s Cathay Pacific Sun Hung Kai Financial Hong Kong Open – but only after coming through a 79-minute five-game marathon against eighth seed Kasey Brown in the quarter-finals of the $74,000 WISPA World Tour squash event, the seventh WISPA Gold championship of the year.

“It was so dead on there. I was struggling to find the balance between defence and attack, and I even thought of asking for the ball to be changed. It’s been bouncy on there in practice, but not today.”

The 27-year-old from Harrogate will now face England team-mate Alison Waters for a place in the final. Fourth seed Waters extended her unbeaten run against Omneya Abdel Kawy by beating the fifth seed from Egypt 9-11, 11-1, 14-12, 11-6.

The other semi-final will herald the 30th WISPA Tour meeting – and fourth in Hong Kong over the past five years – betweenNicol David, the top seed from Malaysia, and Rachael Grinham, the No3 seed from Australia. 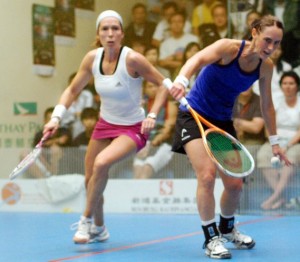 It was the disappointing end of a fine run of form from Ireland’s Madeline Perry who won the biggest Tour title of her career at the Australian Open earlier in the month.

“After taking the first I was ahead in the second, but when she came back to 9-6 I didn’t expect to win it,” admitted Grinham. “I just tried to make her win the points rather than give them away, so having a 2/0 lead was a good bonus for me.

“I thought I was playing well, working her front and back, and she got a bit tired in the third. It’s also harder to get yourself up when you’re 2/0 down. I was more confident with a 2/0 lead so I just kept going for it.”

A dejected Perry responded: “She played really well, and her drops were just ridiculous!”