The round of sixteen in the Delaware Investments U.S. Open at Drexel University in Philadelphia saw all the men’s seeds progress to the quarters but there were three upsets in the women’s event …

Eighth seed Mohamed El Shorbagy survived a 92-minute marathon in the second round of the Delaware Investments U.S. Open to ensure that there will be Egyptian interest in all four quarter-finals at Drexel University in Philadelphia for the first time in the  event’s 27-year history. 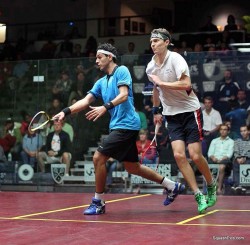 The 21-year-old world No8 from Alexandria faced a ferocious challenge from Cameron Pilley, the world No17 from Australia. After an evenly-contested first four games – three of which went to tie-breaks – El Shorbagy was dominant in the decider to become the first player to reach the last eight. 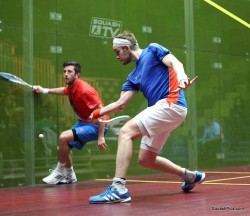 The youngest seed now faces favourite James Willstrop. The world number one from England took on fellow countrymanDaryl Selby with a 10-0 PSA head-to-head record in his favour.

But underdog Selby came close to producing a major upset. The world No11 from Essex took a 23-minute first game, and had a 9-4 lead in the third, but felt the force of the world’s top player thereafter.

“That was probably one of Daryl’s best performances,” said an impressed and relieved Willstrop. “I had to bring out my A game to get through that.” 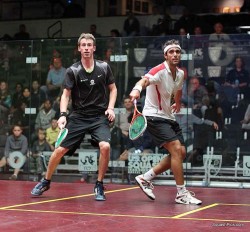 Karim Darwish will represent Egyptian interest in the other quarter-final in the top half of the draw. The No4 seed from Cairo despatched US hope Christopher Gordon, the wildcard entrant who produced the highlight of the first round by ousting higher-ranked Egyptian Hisham Mohd Ashour.

Despite a spirited finish from the New York-born 26-year-old, Darwish was always well in control of his match against the home favourite. “You have to focus 100% on every match,” explained the former world number one. “It’s important to save energy in the early rounds if you can.”

Gordon was delighted with his performance in Philadelphia: “I feel a bit tired after that,” admitted the world No72.

“I commentated on a lot of Karim’s matches last season so I know how efficient he can be at blitzing people in the early rounds. It was so tough, his length is just immaculate and I just tried to keep it going as much as I could.

“It’s been a fantastic week, I’m so glad to have had this amazing opportunity to play these guys when I’m fresh rather than after slogging through qualifying. The support from US Squash and the crowd has been fantastic. I hope they all enjoyed it as much as I did.”
Darwish moves on to meet Frenchman Gregory Gaultier, the third seed who won a scrappy encounter with SpaniardBorja Golan. 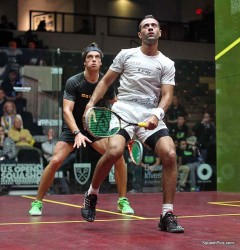 Egypt’s defending champion Amr Shabana moved closer to his fourth appearance in the final after surviving a shaky opening to his match against Laurens Jan Anjema. The Dutchman overpowered the resurgent former world number one and world champion to take the first game.

“I had a game plan and I stuck to it,” revealed the title-holder from Cairo afterwards. “He’s physically very strong and it was tough in the beginning, but I’m happy with how I played in the end.” 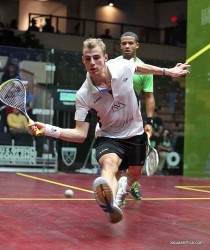 Shabana will now meet No2 seed Nick Matthew in a repeat of last year’s final. The 32-year-old from Sheffield survived one of three all-English second round clashes, beating Adrian Grant 11-2, 11-5, 15-13 in 68 minutes.

Matthew took advantage of an out of sorts opponent to take the first two games – but Londoner Grant was unlucky not to take one of his three game balls before Matthew edged the third.

“He seems to come alive when he’s 2/0 down,” smiled the relieved winner. “I had a lead in the third and let it go, that’s something we’ll have to work on.” 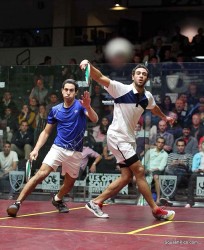 “I was happy with my form tonight,” said Barker, the sixth seed. “Tom maybe wasn’t at his best but I’ll take that and hope to have a good game with Ramy in the quarters.”

Top Five Seeds Through, But Three Fall At First Round Hurdle

While the top five seeded players in the Delaware Investments U.S. Open all progressed to the quarter-finals, it was the sixth, seventh and eight seeds who crashed out of the World Series event at Drexel University, Philadelphia yesterday. 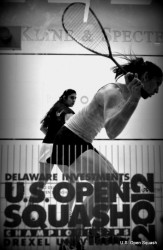 Number seven seed Nour El Sherbini was the first player to fall foul in round one, as qualifier and world No.12 Joelle King fought through a tough first game to close out a three-game win over the sixteen-year-old teenager. 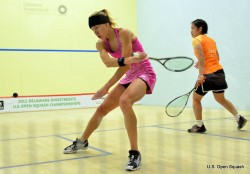 In a similar contest, No.6 seed Annie Au also crashed out of proceedings, falling to last year’s U.S. Open runner-up Kasey Brown of Australia.  Brown led after a first game tiebreak went in her favour and continued to stay ahead of the Hong Kong international to advance to the next round.

Completing the trio of upsets was returning world No.8 Alison Waters who came out on top after a cat-and-mouse affair against experienced Dutch player Natalie Grinham.

The five-game encounter was laid to rest by Waters after 53-minutes of play, and the Englishwoman will progress to face top seed Nicol David, whom she beat in the Carol Weymuller Open quarters in New York last month. 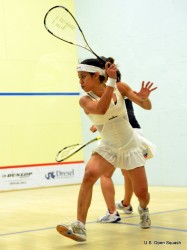 David played out a lengthy three-game contest against qualifier Camille Serme of France, and the Malaysian will be ever focussed to claim the title she missed out on last year, more so after failing to win her last two WSA World Tour competitions. 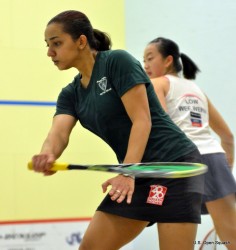 Third seed Jenny Duncalf took just over half an hour to dispatch former world No.1 Rachael Grinham in a straight-forward three games.  The Englishwoman will now face qualifier Joelle King in the quarters, having never lost the Kiwi.