It was a bad day for favourites in the Cathay Pacific Sun Hung Kai Financial Hong Kong Open when both Nick Matthew, the world number one and top seed, and Amr Shabana, the title-holder, crashed out of the $147,500 PSA World Tour squash event, the fifth PSA Super Series championship of the year.

Matthew, the in-form Englishman who arrived in Hong Kong fresh from winning five titles in a row on the PSA Tour, faced England team-mate Peter Barker, the London left-hander who had lost their previous eight encounters.

But after dropping the first game, Barker raised his game to new heights to come storming back to win the next three and claim a career-best 3-11, 11-8, 11-5, 11-5 victory. It was Barker’s first match of the tournament on the Hong Kong Squash Centre’s popular three-sided-glass-walled court – though Matthew was enjoying his third.

“He’s had a couple of matches on this court already, while this is my first. It took me a while to get used to it,” explained the eighth seed to www.squashsite.co.uk later. “I tried to keep telling myself to believe, to break it down, and towards the end to get one more point, one more point.

“I’m very good friends with Nick off court – you never like to see your friends lose even you play them – but I’ve been on the receiving end of a few beatings from Nick for a long time, so maybe today it was my turn.

“It’s very special to beat the world number one, so I’m really pleased, obviously. The tournament’s not over, but it’s been a good week so far,” added Barker, now in his first Super Series semi-final of the year after ending Matthew’s 25-match unbeaten Tour run.

Matthew highlighted an injury which caused him to take a three-minute break during the final game: “We had a collision at the start of the second game. It was accidental, but the pain in my ankle was really severe. I’ve had ligament damage there so often I don’t think I have any ligaments left!

“I carried on, but as the match went on I didn’t have any strength in my left leg and it got more and more painful. But I wasn’t going to shake hands – I’ll always carry on to the end.

“It’s tough to take, losing after six months, especially when it’s partly because your body lets you down. He may have beaten me anyway, who knows, but it’s still tough to take.

“Pete’s a great mate, I wish him well for the rest of the tournament.” 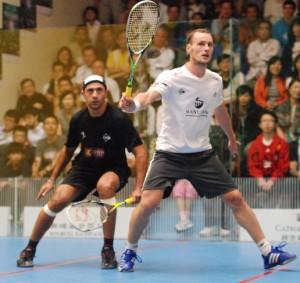 The match that followed also saw fortunes reversed: In this case Gregory Gaultier had come away empty-handed in the previous three Hong Kong Open finals as Amr Shabana, the reigning world champion from Egypt, built up a sequence of five successive titles at the event from 2005.

Was it fourth time lucky, Gaultier was asked afterwards? “I don’t think you can win matches like that with luck,” said the 27-year-old from Aix-en-Provence. “But he’s beaten me a lot of times so it’s good to beat him here in Hong Kong at last, yes.”

“He went for so many shots, and only at the end of the first did he really make any errors. I’d work hard to win a point and then he would win the next in two seconds. I tried to control the pace, but he changed it so well.

“We know each other so well and have such respect for each other that it’s difficult to play each other. We know it’s going to be fair.”

Nick Matthew‘s shock departure leaves the door open for rival Ramy Ashour to reclaim the world number one ranking – but only if the Egyptian wins the title in Hong Kong! The 22-year-old No2 seed from Cairo certainly exhibited the credentials to achieve this as he despatched Matthew’s England team-mate James Willstrop 11-5, 11-8, 11-9 in the last match of the day.

“It was a fast pace for both of us,” said Ashour afterwards. “I went a bit too fast in the first, but he was a little bit backed up. He started getting better towards the end of that game and came out fighting in the second and I had to work hard to contain him.

“The third was very even, I just had to keep my focus, just keep playing and be as consistent as I could. You just do what you can do and see if you’ve won at the end.

“I’ve got no thoughts about getting back to number one. Yes it would be great, but my aim is just to do the maximum, even if I’d lost today but played to the maximum I wouldn’t have been upset about it.