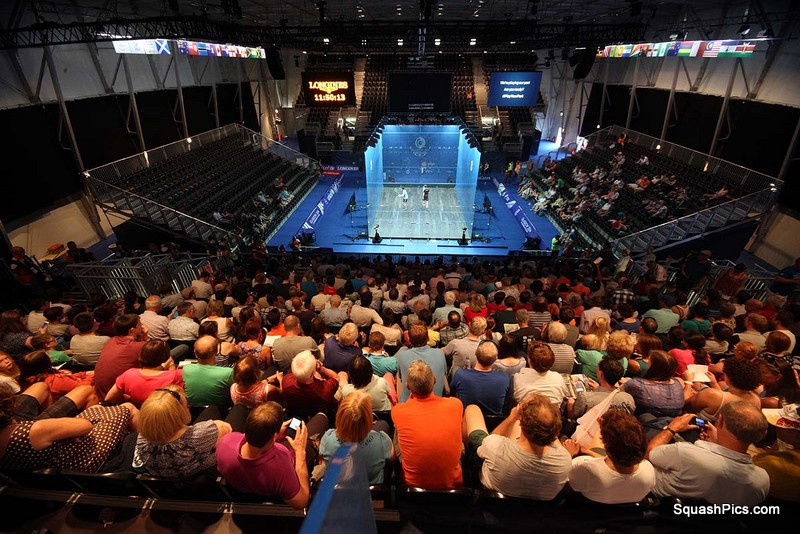 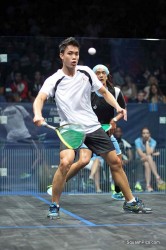 Just 24 hours after eighth seed Ong Beng Hee crashed out of the opening round of the Commonwealth Games Squash event in Glasgow, fellow Malaysian Ivan Yuen restored the country’s place in the men’s quarter-finals after upsetting Botswana’s No6 seed Alister Walker in the last 16 round on the all-glass showcourt at Scotstoun Sports Campus.

“I was quite relaxed, I think the pressure was on him.

“It’s my first time in the quarters – one of the best results of my career,” added the world No72.

“Beng Hee is my doubles partner. I feel bad for him that he didn’t make the quarters, but I feel good that I have been able to take his place.”

Yuen will be joined by compatriots Nicol David and Low Wee Wern in the women’s quarter-finals, while Chris Simpson, from Guernsey, and Saurav Ghosal and Dipika Pallikal, of India, will be marking their countries’ first appearances in the Commonwealth Games’ last eight round.

But England boast the lion’s share of the quarter-final slots – with gold medallist Nick Matthew, James Willstrop and Peter Barker in the men’s draw and world champion Laura Massaro, Alison Waters and Jenny Duncalf in the women’s. 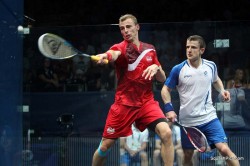 Top seed Matthew disappointed the near capacity crowd by despatching top-ranked Scot Alan Clyne on the day that both players were celebrating birthdays.

“I got the job done,” continued the Yorkshireman. “He was playing his best stuff at the end there and I’ve not had a match of that quality for a while. Even with the injury, our season ended in May so it was May since my last game in front of a crowd like this, so it will stand me in good stead for the rest of the tournament.

“The last few days I’ve had the flag-bearing; on Thursday it was my 100th cap; and today my birthday. Hopefully there’s nothing on Saturday! I’m ready to focus on the squash now.” 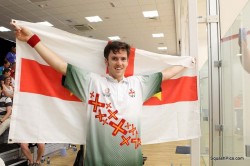 Matthew will face Simpson for a place in the semi-finals.

“I know Chris well. We share a coach, David Pearson, and he trains in Harrogate so I know him very well. He’ll be hungry. He just missed out on the England team and he’s playing for Guernsey. He carried the flag as well so he will be up for it and it should be a great match.”

“It was a very tense match – there was a lot of to’ing and fro’ing in the match. There was an injury break in the fourth after I accidentally trod on his toe which I think aggravated an earlier injury. I was starting to get back in to the match and it ruined my momentum, but then I had a good finish.

“I was very nervous this morning, thinking about the expectations of my country after carrying the flag at the Opening Ceremony – what if I dropped out without even getting the chance to get on the glass court?

“It’s a real relief to know that my next match is on the glass court – now I can allow myself to go and see what the setup looks like,” explained the world No23. “I refrained from doing so until I’d earned my place on it!

“Playing here is not just about being in the Commonwealth Games, but about representing Guernsey. For such a small country, Guernsey are doing a great job in supporting us over here.” 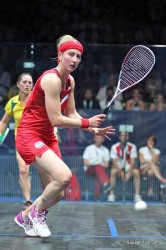 “That was very tough,” said the No4 seed. “Rachael played really well – I had to dig deep in the third.

“You don’t get many last 16 matches in front of a crowd like this. It was a great feeling when you walk into the arena.”

“It was amazing – the best experience of my life, for sure,” said the 16th seed Kiwi. “You couldn’t ask for more: playing on an all-glass court, in front of this amazing crowd, and against the number one in the world – it just doesn’t get any better. It’s so good for squash.

“Getting selected to be here has been my biggest goal for a long time – and I guess the next will be to break into the world’s top 30 and winning some big events. I really want squash to be in the Olympics – I could be in my prime then!

“I’m now looking forward to playing in the doubles. I’m playing with Kylie Lindsay and we meet Nicol and (Low) Wee Wern in the first round. We played them recently and lost by just one point!” 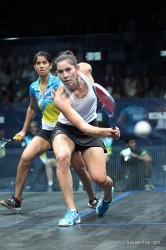 “I’m glad to get through that one. I started off really well and had a patch where Joshana really came back and had a bit of momentum but I relaxed again in the fourth and got the win,” said world No4 King.

“The crowd was amazing – I had butterflies in my stomach coming out there. The court is probably one of the best courts I’ve ever played on.

“I guess it is the biggest event of my career. I’ve probably been preparing since I lost in the quarter-finals in the singles last time.” 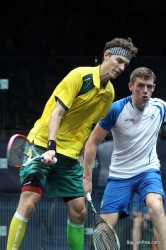 “I made it this far four years ago but need to look forward to a good win tomorrow to give myself medal chances.

“The atmosphere here is amazing – just unbelievable. It’s like a Coliseum – like playing in a pit of Scots! Hopefully the crowd will switch their allegiances to me tomorrow!”

Pilley will line up against England’s Peter Barker, bronze medallist in 2010.

“It was a relief when I saw the draw and realised I wasn’t in the same quarter as one of the top two seeds,” continued Pilley. “But Pete is a good player who has beaten me the last five or six times.”

Madeline Perry, one of a handful of players celebrating a fifth successive appearance in the Games, takes Northern Ireland interest into the quarters for the third time in a row after an 11-4, 10-12, 11-8, 11-5 win over Australian Kasey Brown.

“Delhi was stressful for me – so it’s all about enjoying it this time,” said the 37-year-old world No11 from Belfast. “I’ve always struggled with Kasey – she’s beaten me a good few times. But today I felt I was in control of most of the rallies.

“I tore my adductor a few months ago which knocked me back a bit – and it’s only the last month or so that I’ve felt normal!

“Retirement? I think I said it after the last three Commonwealth Games – and I’m still here. But I think this will definitely be my last Games!” 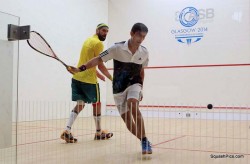 Ghosal made his Games breakthrough following an 86-minute win over Australian Steven Finitsis.

“It was neck and neck in the fifth – I was 7-6 down but managed to string together four or five points in a row to take the match.

“Winning a match like that is physically demanding, but it gives you a lot of confidence mentally,” Ghosal continued. “I have really been focussing on the Commonwealth Games for the last six or seven months. I am very happy to be the first Indian to make the quarter-finals.”