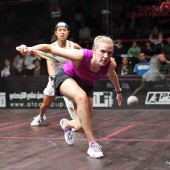 Massaro sprung arguably the biggest surprise when she beat seven-time world champion David (MAS) 2-0 (12/10 11/9) in 29 Minutes.  “You have to play well when you’re playing Nicol otherwise you’re off court before you know it,” said Massaro. “She’s just won her seventh world title and she’s playing really well and that means winning today is even more special.”

David, who is also the defending champion at Queen’s Club, was gracious in defeat. “When the other person is playing better on the day there isn’t a lot you can do,” she said. 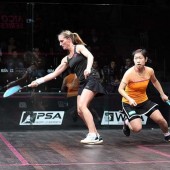 The tournament’s round robin format means that defeat does not end David’s chances of defending her title. Nour El Sherbini also sprung a surprise when she beat fellow Egyptian Raneem El Weleily with a 2-0 (11/8 11/8) win to end El Weleily’s hopes of reaching the knock-out stages. Camille Serme secured her place in the semi-finals with a 2-0 (11/7 11/4) win over England’s Jenny Duncalf. 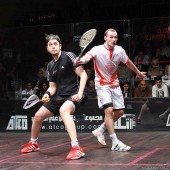 Gaultier is also assured of his place in the semi-finals. He provided an extrovert presence on court against Willstrop during his 2-0 (11/6 13/11) win over the Englishman. “I played better than yesterday,” said Gaultier. “I enjoyed playing against James. He doesn’t open the court up much so you have to work really hard.”

Willstrop said afterwards that he drew consolation from the quality of his performance, despite a defeat that leaves him needing to win in Friday’s meeting with Germany’s Simon Rosner. “I think it was a high standard,” said Willstrop. “I played well for long periods of that match and didn’t come out with anything to show for it.”

In Pool A two from Shabana, Matthew, Shorbagy will qualify for semis
In Pool B Gaultier qualifies for the semis, to be joined by the winner of Willstrop v Rosner