As the World Open Squash 2011 moved to Rotterdam’s impressive Luxor Theatre, it was a case of coming back from two games down for three of the men’s top seeds.

There was mixed success for the local stars as Laurens Jan Anjema and a partisan crowd saw his two-game lead against Gregory Gaultier disappear as the Frenchman mounted one of the day’s comebacks, while four-time finalist Natalie Grinham scored a straight-game upset over fourth seeded Irishwoman Madeline Perry. 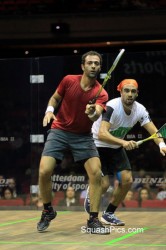 In the first of three matches in which higher-ranked players survived from two games down, four-time world champion Amr Shabana prevailed against fellow Egyptian Hisham Mohamed Ashour on the opening day of PSA World Open action on an all-glass squash court at the New Luxor Theatre in Rotterdam.

Left-hander Shabana, who had never before lost to his Cairo compatriot, also came back from behind in the fourth game before triumphing 3-11, 8-11, 11-4, 11-9, 11-5 in 48 minutes to reach the quarter-finals of the premier PSA World Tour event for the ninth year in a row.

“The way things were going early on, it was very one-sided,” said the relieved 32-year-old former world number one. “I was thinking at 2/0 down that there’d be a flight home for me this evening!

“The desire is still there, otherwise you’re just going to lose and look bad.”

In what will be their 23rd Tour meeting since 2004, Shabana will now face James Willstrop, the fourth seed from England who ended the sensational maiden World Open run of 18-year-old Marwan El Shorbagy by beating the Egyptian qualifier 11-8, 11-3, 11-0.

“I’m playing James tomorrow – he’s an amazing player,” continued Shabana. “We’ve had so many battles. I think both of us have to raise our game for the World Open and the spectators are going to be in for a treat.” 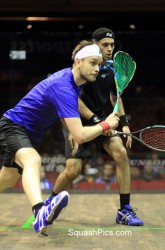 Willstrop, the only player not to have dropped a game in Rotterdam, felt that the second game was really important after getting a good start: “Mentally I was good there today, I stayed focussed.

“We obviously have one less rest day than the top half, but we do get onto the glass court a bit quicker – so whichever way you look at it, there are advantages. Obviously having won like that today and not spent too much time on court, it’s better to do what I have been doing.

“Had I played a longer match today, then it would have been difficult having to play tomorrow too. It’s difficult because it has to be organised one way or another, but I think it’s evened out quite well,” explained the 28-year-old from Leeds.

“I’ve performed consistently so far – I’m at No3 in the world now. I don’t need to convince anyone – and getting to the final last week was good. But it’s about producing it on a given week, and this is the one week of the year when we’re all trying to do that at the same time – and that’s the great thing about the challenge at the moment.”

Domestic hopes were pinned on Laurens Jan Anjema – and by the time the six-time Dutch champion had gone two games up against sixth-seeded Frenchman Gregory Gaultier, a two-time world finalist, the crowd had worked itself up into a frenzy.

But after all the Dutchman’s hard work, it was Gaultier who assumed control of the next two games to draw level. A good lead in the decider held the Frenchman in good stead as Anjema – urged on by the crowd – mounted a comeback. 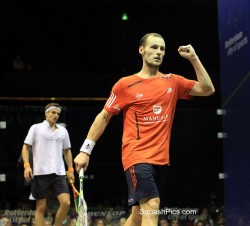 “It was difficult in the beginning to make my mark on the court tonight,” said world No5 Gaultier when interviewed court-side by Dutch international Vanessa Atkinson afterwards. “I was behind him and I managed to stay focussed.”

The Frenchman then addressed the Dutch crowd: “And you guys chased me out so much. I’m not pleased with you all tonight, but hopefully tomorrow night you will come and cheer for me this time!

“I’m used to playing the home favourite. Last week, for example, in Qatar, when you play an Egyptian there you get the crowd against you. Maybe tomorrow I’ll get some support!”

And there was more drama in the final match of the night when 2008 champion Ramy Ashour, the No2 seed from Egypt, also fell two games behind – to unseeded Alister Walker, of Botswana. 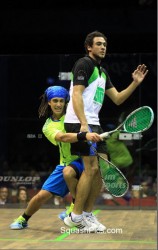 “It was one of the toughest matches I’ve played for a while,” admitted Ashour later. “At this stage of the year everyone’s hitting the ball as good as a world No1 so you have to be prepared and you have to be on your toes.

“I could barely see the ball in the first two games, he was all over me. The pace of the game is so high and I had to keep up with him, there was no way of winning unless I kept up the momentum.

“This win has given me more confidence in my body, and in my head and I’m enjoying it so far so I hope I can keep going.” 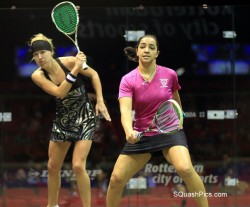 The main drama to happen at the theatre occurred in the evening session, but the first winner at the mightily impressive Luxor Theatre was Australia’s Kasey Brown who won an up and down five-setter against in-form Egyptian Raneem El Weleily.  El Weleily’s shots were on target in the first but then she started find the tin as Brown came back to lead 2/1. El Weleily found her range again to level, but handed Brown too a good lead in the fifth, and despite fighting back to almost parity after an hour’s play Brown finally put a ball too wide and deep to advance to the quarter-finals with a 4/11, 11/7, 11/3, 6/11, 11/8 scoreline.

There she’ll play defending champion Nicol David in a repeat of their meeting in Philadelphia which the Australian won. David looked in good form against young Egyptian Nour El Sherbini who, although she managed to stay within reach of her illustrious opponent’s score in each of the three games, never seriously threatened the five time champion who won 11/7, 11/6, 11/7. El Sherbini had almost not started the match having sustained an ankle injury whilst warming up but some swift physio action saw her able to take centre stage and demonstrate some of the skills that had seen her upset Donna Urquhart in the previous round. However, the defending champion was always looking to up the pace and cantered home in straight games.

The first upset of the day came as Malaysia’s Low Wee Wern put in an inspired performance against France’s Camille Serme, the seventh seed who made the semi-finals last year. Low was always ahead in the first, and crucially saved game ball before taking a close second. Serme hit back to take the third easily but the Malaysian always had the edge in the fourth, with Serme throwing in a few errors at crucial times. Low thus makes the quarter-finals for the second year in a row, 11/4, 12/10, 2/11, 11/7. 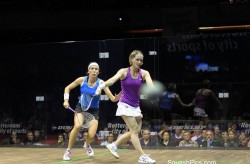 Twelfth seed Natalie Grinham delighted the ever-growing and excited Luxor audience with a straight-game win over Irish fourth seed Madeline Perry. Irresistible in the first two games with her flicks, holds, drops and relentless running, the four-time runner-up was in charge, although Perry’s frustration wasn’t helped by a number of unforced errors on her part.  Perry steadied in the third, established a decent lead, but couldn’t stop Grinham’s comeback as she picked up where she left off in the first two, eventually winning on a stroke at the end of a scrambling rally.

Women’s Round Two (top half):