The semi-finals of the XIth Qatar Classic at the Khalifa International Tennis and Squash Complex in Doha saw a contrasting set of semi-finals in which one defending champion stayed on course while one was dethroned, and three very different three-nil wins.

The WISPA World Tour semi-finals featured the same four players as last year, although they were playing different opponents. 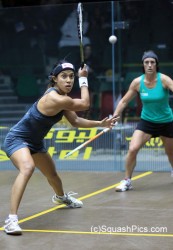 Nicol David met Rachael Grinham in a repeat of the 2010 final, and just as then it was the Malaysian world number one who triumphed. She was tested though, sorely tested by an Australian who seemed not to know that she was on the wrong end of a run of 14 consecutive defeats to David, and so very nearly forced a deciding game.

“Our matches are nearly always five setters or/and 1h30m, so needless to say I’m happy with this 3/1 victory in 50 minutes,” said a relieved Nicol.

Both were playing their second successive Qatar Classic semi-final, but they had never played each other before. Not that you would have known as they traded blows for just over an hour with never more than two points separating them.

It was a dramatic encounter, with long rallies, fast action, dives and numerous interventions from the video appeals referee. In the end it was a relieved Irishwoman who won 11/9, 19/17, 11/9, but as she said afterwards,

“It was a three-love but it was never a three-love, was it. I was just able to play the big points at the end of the games better, but I was very happy to win that last point!” 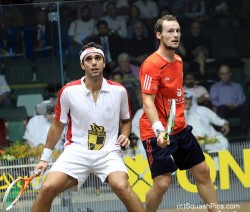 The first PSA World Series semi-final was the third meeting in Doha between Karim Darwish, Egypt’s defending champion and third seed, and Gregory Gaultier, the Frenchman who reached the final in 2007 and is seeded sixth this time around.

Those meetings had been shared, but today Gaultier turned in one of his best performances, taking a close first game, increasing his control in the second and totally dominating the third. 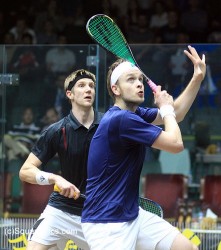 The final match of the day demonstrated a third way of winning three-nil as James Willstrop, champion here back in 2005, recovered from early deficits against unseeded Aussie Stewart Boswell in the first and third games, in between cruising through the second to win 11/8, 11/3, 11/9 in just short of an hour.