Nicol David successfully defended her title – and endorsed her status as the world’s number one woman squash player – by beating world No2 Jenny Duncalf in the final of the Cayman Islands Open, the $55,300 WISPA World Tour Gold event – the third of the year – at Camana Bay on Grand Cayman.

Despite going into the match 2/19 down in their career head-to-head tally, England’s Jenny Duncalf had won two of their last three meetings and was hoping to become the first player for many years to record three wins over the formidable Malaysian.

The 27-year-old from Harrogate in Yorkshire matched world champion David point for point for the vast majority of the first two games, but the defending champion closed out both tight games. 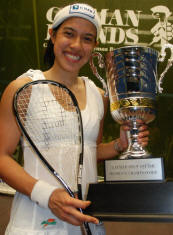 David, 26, from Penang, came out bouncing for the third, quickly going 5-1 up and looking in control.  Duncalf pulled a few points back, but from 6-3 she put three balls quickly into the tin and shortly afterwards David clinched her tile-winning 11-8, 11-8, 11-4 victory after 32 minutes.

“It’s always tough against Jenny,” David told the official website www.squashsite.co.uk/cayman afterwards.  “It felt more like a 3/2 than a 3/0, the first games were really tight.

“It’s so great to be able to defend my title here.  Dan (Kneipp) and his team have done another fantastic job – it’s ten times better than I could have imagined, and the sponsors and the government have put so much in to make the event a success.

“Hopefully I’ll be back to defend my title next year – and if my body’s still well I’ll definitely be here for the World Open in 2012!”

The triumph takes Nicol David to her third successive Tour title of the year and the 44th of her career.

The world’s top two players will contest the climax of the Women’s Cayman Islands Open after Nicol David and Jenny Duncalf prevailed in straight games in the semi-finals of the $55,300 WISPA World Tour Gold squash event – the third of the year – on Grand Cayman.

It will be a fitting finale for the popular event in its second year in the Cayman Islands, but its first staged on an all-glass court at Camana Bay.

In the opening all-British clash, England’s world No2 Jenny Duncalf claimed her first appearance in the final after beating Madeline Perry, the fourth seed from Ireland, 11-8, 11-8, 11-5.

While rain fell on the spectators, Perry established significant leads in the first two games, but Duncalf battled back to reclaim the advantage – and then romped to a 7-1 lead in the third game.

“It was much hotter on there today,” Duncalf told the official website www.squashsite.co.uk/cayman afterwards – much to the surprise of the wrapped-up spectators!  “And humid too.  So it was tough.  Madeline made me work hard.  It’s usually 3/1-ish between us, so to win 3/0 is a bonus!

“I had a bit of a dip in the middle of the second, but I was pleased with how I dug in and with my focus overall, it was important to get the second and I managed to carry that momentum to get a good start in the third,” added the 27-year-old from Harrogate who lost in the semi-finals last year.

“It’s good to go one better here than last time – you always want improvement, but it would be nice to go two better!”

“That was a clinical display,” said Nicol’s coach Liz Irving of her ward’s progress to a second consecutive Cayman Open final.

It was the pair’s 31st meeting – and the win extends David’s head-to-head record over the former world number one to 24/7 over exactly ten years.

“I know when I play Rachael that if she gets a chance to play her shots they’ll go in, so I have to play mine first,” explained the world champion from Malaysia.  “She always brings my game up when we play, it’s always a good show.  I just have to keep my focus and play the right shots at the right time.”

The top four seeds secured their anticipated places in the semi-finals of the Women’s Cayman Islands Open – with defending champion Nicol David making short work of her quarter-final victory in the $55,300 WISPA World Tour Gold squash event on Grand Cayman.

The Malaysian favourite, bidding to win her third successive WISPA gold event this year, came up against rising French star Camille Serme, the 21-year-old seventh seed from Creteil who boasts a career-high world No11 ranking.

“That was a tough match – we had some really good rallies, working rallies, especially in the third,” explained title-holder David to the official website www.squashsite.co.uk/cayman afterwards.  “We were both trying to out position each other:  I’m just pleased to win it 3/0.”

David will now face career-long rival Rachael Grinham in what will be the pair’s 31st meeting since contesting the Milo Open final in Malaysia exactly ten years ago!  Grinham, the third seed from Australia, was fully tested by Sarah Kippax before beating the English qualifier 8-11, 11-7, 11-9, 11-9 in 45 minutes.

“That was very tough, very close,” said the relieved winner. “I was disappointed to lose the first after having a good lead, but in the end I was a bit lucky to win it in four.

“I was trying not to think about a fifth, just trying to dig in and push for each rally,” added the former world number one from Queensland.  “I’ve always had a lot of respect for Sarah, she has great potential and it’s good to see her starting to fulfil it.  She’s had some good results and there’s more to come.”

The other semi-final will see England’s second seed Jenny Duncalf line up against Ireland’s Madeline Perry, the fourth seed.  Duncalf despatched unseeded French opponent Isabelle Stoehr 11-5, 11-8, 11-8 in just 28 minutes, while Perry was stretched for 62 minutes and had to recover from a game down to beat Australia’s sixth seed Kasey Brown 3-11, 11-6, 12-10, 11-7.

“I often start slowly these days,” said Perry, the world No7 from near Belfast.  “I was slow but she came out very fast and was on top of me in the first game.

“It’s hot on there, too hot for me,” added the winner.  “But I’m really pleased to win that 3/1.  I could feel her coming back at me towards the end so it was good to finish it off.”