David was at the brilliant best as she shut out Duncalf 11-8, 11-4, 11-6 to ensure her name is added to the Heather McKay Trophy alongside some of the greatest players the game has ever seen.

The world number one took control from the first game when she jumped out to a 6-1 lead and although Duncalf fought back to level terms, she was always playing catch up and David closed out the opener with a drive deep into the back corner. 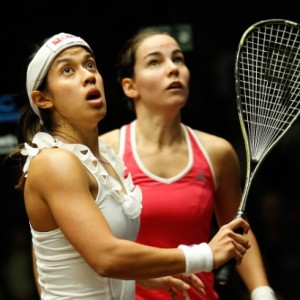 David, who is coached by Australia’s Liz Irving, opened another early lead in the second and this time Duncalf was unable to peg it back, the Malaysian wrapping the game up when she was awarded a stroke by the referees.

Duncalf had a better start to the third but at 4-4, David again broke clear and the end was inevitable, the world number one smashing a backhand cross court deep into the corner, leaving Duncalf swinging at air.

“You just know this Australian Open has so much history,” the 27-year-old from Penang said.

“With all those big names on that trophy, you just know you want to get that title as well and I’m really pleased to win it.

“I knew that today was going to be a tough final, she knows my game really well and we play each other a lot. I really had to stay consistent in there, I was moving well, I focussed well and I just stayed on my game.”

David said her good starts to the first two games had given her a big advantage.

“Knowing I was watching the ball well, I could move well and I had to give her no time to player her shots, because she is so dangerous when she has time,” David said. “I was trying to keep the ball going and not make any errors.” 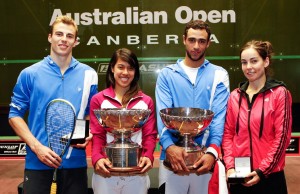 Duncalf conceded her slow start had cost her dearly.

“You’re always playing catch-up. Especially the first, it ended up being pretty close so those few points make a difference,” Duncalf said.

“She gets everything back, against Nicol you’ve almost got to play a run of winners because in the actual rallies she picks up most shots, which you’ve got to try and let not frustrate you. She’s a great mover and a great retriever which makes it quite difficult, but you’ve still got to be positive and take it in when you can.”