Egypt’s Amr Shabana came through an intriguing battle with Frenchman Gregory Gaultier to take the title at the ATCO World Series Squash Finals, whilst World number one Nicol David of Malaysia continued her domination of the women’s game with victory at the famous Queen’s Club, London. 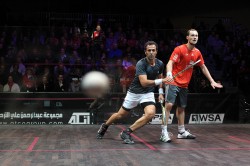 The sensational 91-minute men’s final, in which the 32-year-old four-time world champion was taken the full distance by higher-ranked Frenchman Gregory Gaultier, was a fitting climax to the flagship PSA Tour event which featured the eight most successful players from the nine PSA World Series championships in 2011.

World No3 Gaultier, celebrating his fourth final in four appearances in the championship, came out with all guns blazing and quickly opened up a 5-0 lead before going on to take the game.

Shabana, the former world No1 now ranked eight in the world, seemed revitalised in the second and – helped by a sudden spurt of unforced errors from his opponent – battled to game-ball at 10-5. But the stylish left-hander was unable to close out the game as the younger Frenchman gradually reduced the deficit before drawing level.

The game was characterised by two incredible marathon rallies – the veteran Egyptian matching the 29-year-old Gaultier shot after shot. The courageous Shabana refused to bow down, however, and finally claimed his sixth game ball to draw level. 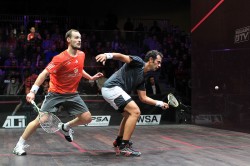 From 4-6 down in the third, Shabana won five points in a row as Gaultier became embroiled in arguments with the referee. The former champion took another point but it was the Egyptian who maintained the upper hand to take the game and move 2/1 up.

Despite the pundits’ view that longer matches would favour the younger player, Shabana capitalised on his momentum to lead 7-6 in the fourth. But the Aix-en-Provence ace refocused to take the next five points in a row to force a fifth game.

The packed Queen’s Club crowd certainly got their money’s worth – and no more so than at two-all in the decider when Shabana twice dived full length in the rally to keep the ball in play, and Gaultier inexplicably responded by putting the ball into the tin to give the Egyptian the point!

The next two points went to Gaultier, but thereafter it was Shabana who maintained the lead – and after one match-ball was saved, it was an irretrievable backhand drop shot from the back of the court that gave Shabana his historic 6-11, 12-10, 11-7, 7-11, 11-8 victory.

The crowd gave the two players a standing ovation while Shabana lay flat on his back outside the court. When Sky MCNatalie Pinkham began to interview the new champion after he sat up, he urged her to keep on talking while he got his breath back! 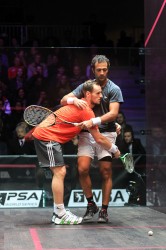 When asked to sum up his feelings about his win at this stage of his career, Shabana admitted that he had considered quitting the game a year ago: “I can’t player better. I was nearly out last year – thinking about if it’s time to watch the players play rather than competing with them.

“If it wasn’t for my friends and family – one of whom was Greg, who kept telling me to push – I think I would have retired. I tried my best.”

How special was it to win his first title in the UK, asked Ms Pinkham: “I’m not going to miss that question, so I thank god I won’t be asked it again now that I have won,” said the Cairo-based star, who now boasts 28 PSA World Tour titles.

Gaultier also joined in the post-match interview: “I am disappointed to lose – but I am really happy for him as he was struggling last year. I learned a lot from him – he’s great for the game,” said the Frenchman.

“Hopefully I will win the next one!” 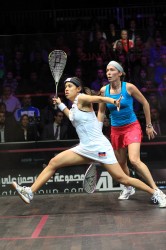 Women’s World No.1 Nicol David closed out three tight games to come through her final test in straight sets against Madeline Perry. Perry will feel like she had to opportunity to test the World Champion to a greater extent after the first two games but ultimately fell to an 11/9, 11/9, 11/9 (41m) defeat.

David said: “Madeline is a strong contender and came out flying from the start. All of the games were close and I had to concentrate at the end of each to finish them off. I’m really happy to have won.” 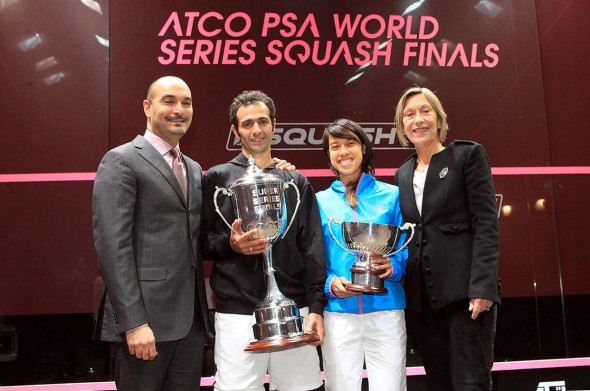