Top seed and defending champion Nicol David claimed her fifth Qatar Classic title with an impressive straight-games win over Madeline Perry, who summed up the performance of her Malaysian opponent as “too fast, too accurate, too good.

For France’s Gregory Gaultier it was a first Doha title as he took a two-game lead over English rival James Willstrop, the fourth seed who stormed back to take the third but lost out in a tense finish to the fourth and final game. An ecstatic Gaultier thus collected his first major title for over two years.

In his first major title success for more than two years, France’s Gregory Gaultier stormed to victory over England’s higher-ranked James Willstrop in the final of the 2011 Qatar Classic to pick up the trophy for the first time in the sixthPSA World Series squash event of the year at the Khalifa International Tennis & Squash Complex in the Qatar capital Doha.

Both playing in their second Qatar Classic final – Willstrop was champion in 2005 and the Frenchman runner-up in 2007 – both players had been in impressive form in the run up to the final, and delivered a quality match to the packed audience in the glass court arena.

After pulling clear from seven-all in a tight first game to go 1/0 ahead, Gaultier was on top early in the second, establishing a 6-2 lead which, despite the fourth-seeded Englishman’s efforts, Willstrop couldn’t close down as Gaultier doubled his advantage.

The third game was all Willstrop, and after the Englishman had pulled clear Gaultier let the last few points go, clearly preparing himself for the fourth.

And it was Willstrop again who made the stronger start, leading 4-1 and 7-4. But, with the crowd noisily on his side, Gaultier fought back to draw level at eight-all.

After numerous lets in the closing stages, it was Gaultier who eventually took the final three points to claim his first World Series title since winning the PSA World Series Finals crown for the second time in a row in March 2009.

“We’ve been playing each other since we were that high, since we were juniors,” the delighted Gaultier toldwww.squashsite.co.uk after his 11-8, 11-7, 2-11, 11-8 victory. “We had some memorable battles. It’s actually nice to see each other back in the final. He is just a gentleman on court, such a fair player – I have tremendous respect for him. 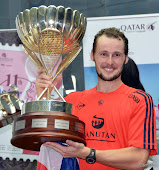 “Doha is my second home now,” continued the 28-year-old world No6 from Aix-en-Provence. “Joking apart, I’ve been coming here since the age of 16 or 17, and I’ve seen all the great players win this title – so for me, it’s like a dream come true, especially as I haven’t won a major event for two years now.”

Yorkshireman Willstrop, celebrating his 25th appearance in a Tour final, was full of praise for his opponent: “In the first two games Greg played down the backhand side and was much better than me, which is a bit frustrating as it’s normally considered my strength. He played some super squash, his attacks were better than mine, his accuracy and length was just superior to mine.

“In the third, I put it together better, I used my brain plus the help of Chris (Robertson, the England national coach), as I knew something had to change,” continued the world No4 from Leeds.

“I had to find a way to stop him damaging me on that backhand side, as he was in a comfortable position to hurt me with his shots. Maybe I made a few too many errors there, but it was probably something to do with the way he was playing!

“There are reasons why he keeps on winning matches like that, my length and width was just not good enough to preventing him from attacking, which means that, at the end of the day, he played better.

“He’s been going on all week about how good he felt, how good he played – and he proved it tonight.”

The win marks the 19th PSA Tour title of Gaultier’s career – and will boost the former world number one’s confidence on the eve of next month’s PSA World Open in Rotterdam.

David makes it Five in Doha

“Too fast,” was Madeline Perry’s instant verdict after Nicol David collected her fifth Qatar Classic title with a supreme performance in the final against the Northern Irish fourth seed playing in her first Doha final.

Nicol has been here before, and she was instantly at home, shrugging off an error on the first point of the match to take the next seven with a combination of drops, volley drops and boasts that were either winners or forced errors from Perry.

Madeline got one more point in the first, but Nicol continued in the same vein to take the opener 11/2 in 7 minutes, and at 5/2 in the second a very quick final looked on the cards with Madeline struggling to get a foothold in the match.

Gradually she managed to stay in the rallies, found a few openings appearing and pegged back that lead.

5/4, 6/5, then she levelled at 7-all as Nicol hit a rare tin, but the Malaysian followed that with four winners in quick succession, a dropshot, a loose shot driven away, a perfect dying length and a short drive glued to the wall for 11/7 after 17 minutes.

Two-nil down against a Nicol who’s playing well isn’t a nice place to be, and the match continued in the same vein, Nicol forcing the pace, Madeline doing her best to keep with it. 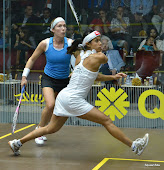 But the scoreboard kept rolling the Malaysian’s way, 3/0, 7/2, and it only took one match ball, which was possibly the longest rally of the match, before a final dropshot left Madeline stranded and Nicol looking at the prospect of picking up the trophy for the fifth time.

Nicol may have been a little defensive at the start of the week, but by the end she was running, no purring, on all cylinders, and everyone had better watch out in Rotterdam next week …

“That first game? Well, I had a hit with Greg this morning!!!!!, admitted Nicol after the match.

“It was far from easy, but today, I just had that feeling you get at the end of the tournament, on the last day, where you just want to get on there, and give it all. Madeline always played 100%, but she had a few matches that were more difficult than mine, it was an easy path to the final for me … I was lucky as she didn’t play as many shots as she normally does.

“This was the best I felt and the best I played all tournament, I felt good on there, and comfortable from the start. My length today was really good, I was able to contain her and prevent her from playing her shots, she is so dangerous on the volley. It’s one of those days where everything just comes together, and work your way….

“It is one of those events where you just love to come back to, a combination of the people, the organisation, the court, the fact I got to 5 finals, and that I won them all, and also, I have so many people that come and support me, that makes a big difference.”

Perry was disappointed, but impressed with her opponent’s performance:

” She took the ball so early and went short right from the start, volley dropping from the first rally. That’s not what she usually does and it took me a bit by surprise, I was expecting to be able to work my way into the match for a few rallies.

“When she’s playing well she gets on a roll and it’s really tough to keep with her. If I’d managed to sneak the second maybe I could have held it, but once she was two-nil up I was struggling.

“Too fast, too accurate, too good.”