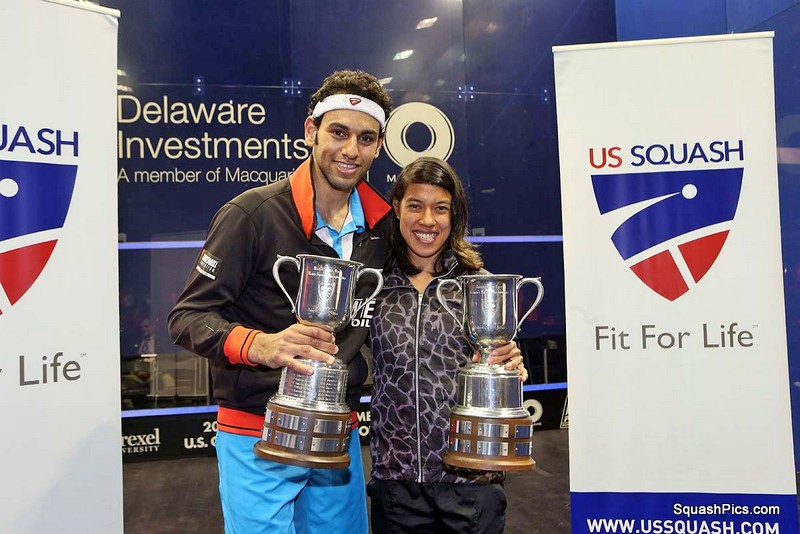 It was a mixture of youth and experience that triumphed in the finals of the Delaware Investments U.S. Open in Philadelphia – Nicol David beat Nour El Sherbini to claim a third title in a row while Mohamed Elshorbagy celebrated his rise to world #1 with victory over Amr Shabana. 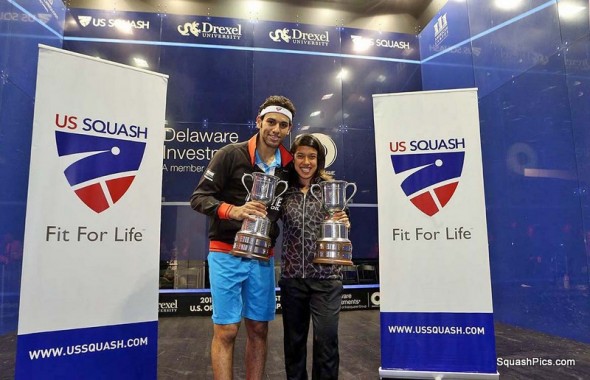 Elshorbagy Is US Open Champion

23-year-old Egyptian Mohamed Elshorbagy, the powerhouse from Alexandria who will top the PSA World Rankings for the first time on November 1st, capped of the most successful week of his career by claiming the 2014 Delaware Investments US Open at Philadelphia’s Drexel University. 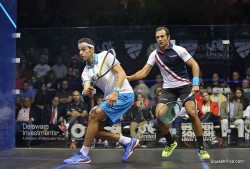 Elshorbagy, who is based out of Bristol, England, saw off compatriot and four-time World Champion Amr Shabana to win the 2014 event and extend his winning-streak to 18-matches, a run that has seen him win back-to-back PSA World Series titles in Hong Kong and Philadelphia either side of further victories in Malaysia and Mexico. 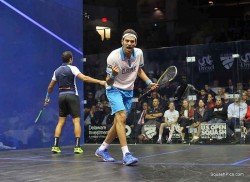 I just can’t believe what has happened. It’s just been such an unbelievable week for me – I knew I could become number one coming into this tournament but I didn’t think both things would happen.

“I had a tough draw to get to the final, I had to beat World No.1 Gregory Gaultier and a legend like Amr Shabana to win so not only did I get to number one, I feel like I have proved it as well.” 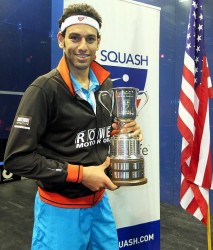 Elshorbagy will now go into next month’s 2014 Qatar PSA World Series Championship in the form of his life and he’ll be hoping to maximise on his momentum to take the tittle away from current holder Nick Matthew.

“It’s been a great season until now but there’s the World Championships in three weeks so I’m hopefully going to make it very hard for the other players and keep my momentum going,” he said.

“I’m feeling confident right now but that’s not fooling me, I know I still need to work very hard.

“For me becoming World No.1 is just the first step on the ladder.”

Malaysian superstar Nicol David claimed the latest historic achievement in her illustrious squash career when she beat Egypt’s Nour El Sherbini in the final of the Women’s Delaware Investments US Open in Philadelphia to become the first player in the 60-year history of the championship to win the title three times in a row. 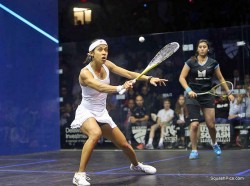 The top seed and the world number one for 99 successive months since August 2006, David was expected to make the final of the WSA World Series Platinum event at Drexel University – the 95th of her career.

But El Sherbini was the event’s No7 seed – and scored mighty upsets over both second seed Laura Massaro, the world champion from England, and France’s fourth seed Camille Serme to claim her unexpected place in the climax.

With heavy strapping on her right thigh, the Egyptian teenager looked to be struggling with her movement in the first game as David  pushed her to all corners of the court.

“For the next two games, however, the 18-year-old from Alexandria matched David all the way,” said a spokesman for the event. “Looking calmer and more controlled, El Sherbini was moving better, hitting better, and we had a real contest on our hands.” 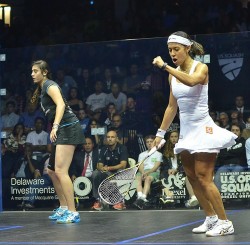 El Sherbini was a point or two ahead for most of the second, but it was David who reached game ball first at 10-9, doubling her lead at the second attempt, 12-10, as the Egyptian’s dropshot clipped the tin.

From seven-all in the third, El Sherbini moved ahead to earn three game balls at 10-7. But David is renowned for comebacks, and forced three errors from the Egyptian before reaching match-ball.

But as the 31-year-old world number one from Penang served for the match, the ball burst – delaying the final point as the new one was warmed up.

Minutes later, however, David blasted a shot out of El Sherbini’s reach to claim her third US Open title. 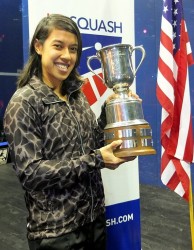 “Sherbini played such a good game of squash, and I really had to play even better because it was so difficult out there to win that title.

“I think with Sherbini it’s more of just getting in the groove. I think in the second game she just found the rhythm and flow, and also just good shots and she was really putting on the pressure. So I had to keep up with that pace and, at the same time, bring my game forward so I’m really pleased with that.

“I’m so pleased – really happy to win another US Open.” 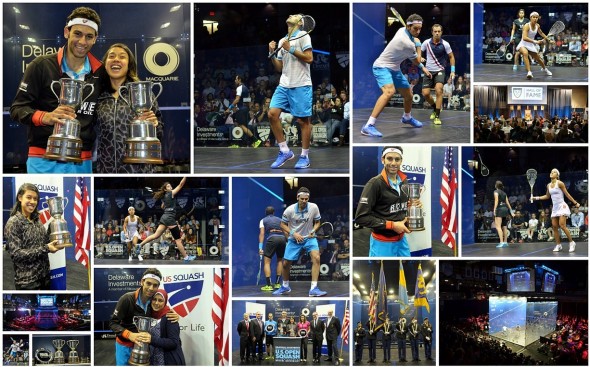