The world number one and two set up the dream final in the CIMB Malaysian Open today.  The second event of the WISPA World Series has already showed some incredibly high levels of squash from the world’s top female players and the semi finals were no exception.

England’s Jenny Duncalf was the first through to the final with a straight game victory over Camille Serme, both sporting Adidas kit. Duncalf owned a 3-1 head to head over Serme, but she would have been aware of the danger that the French girl posed. The first game was close all the way into the tie break, which Duncalf managed to sneak 14-12. 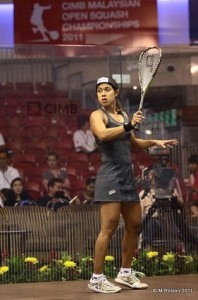 Nicol David delighted the home fans by coming through in straight games against Egypt’s Omneya Abdel Kawy. Kawy, who has not been in the best of form this year, found her game again in the previous round to edge out Rachael Grinham. David, who wears Adidas designed by Stella McCartney, fought off a stern test from Kawy who was in full attacking mode throughout. She had her chances in the second game, taking David to a tie break, but the effects of yesterday’s match took its toll and the Duracell bunny closed out the match after 45 minutes.

The final will be an intriguing repeat of last year’s epic final which David won in five. The world’s top two players also contested the final of the first World Series event of the season, the Cayman Islands Open, where David won in four games.