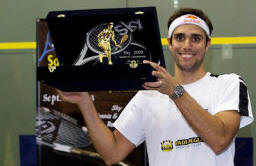 Boosted by last month’s success in the biggest PSA World Tour event of the year so far, Egypt’s Karim Darwish has extended his lead at the top of the new October Dunlop PSA Men’s World Squash Rankings, published today by the Professional Squash Association.

Darwish’s appearance in the climax of the Super Series Platinum Sky Open in his home town of Cairo marked his second Tour final appearance since becoming world number one in January – but gave the 28-year-old his first title triumph when he beat French rival Gregory Gaultier in a thrilling five-game marathon.

Gaultier strengthens his grip on second place in the list – ahead of Egyptians Amr Shabana and Ramy Ashour, who remain at three and four, respectively.

Ankle surgery in April led James Willstrop to drop out of the top ten in the middle of the year.  But a sensational comeback run by the Englishman, including semi-final berths in the CIMB Malaysian Open and Sky Open and his second successive appearance in the final of the British Open, has pushed Willstrop up to seven in the new list.

But two more Egyptians are also celebrating notable rises – Wael El Hindi leaping seven places to No13 after reaching the Sky Open quarter-finals, against the odds; and 18-year-old Mohamed El Shorbagy, who continues his meteoric rise up the rankings to register a career-best No 14.

Of further interest in the full PSA ranking list – which features more than 450 players from all over the world – is that players in the top 50 represent a record 20 nations. 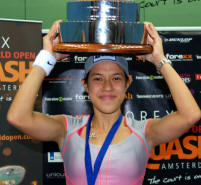 The 26-year-old Malaysian recovered from the shock of surrendering her British Open title midway through September to clinch the Forexx Women’s World Open trophy in glorious style in Amsterdam on Sunday.

Natalie Grinham, the 31-year-old who won a record three Commonwealth Games gold medals for Australia in 2006 and is now a Dutch national, is richly rewarded for a fine comeback from injury and illness with a return to No2 in the new list.

The younger Grinham sister followed her success in lifting the New Zealand Classic title in August by reaching her third successive WISPA Tour final at Amsterdam’s Frans Otten Stadion last week.  Natalie took the opening game in the World Open final, but her impressive run finally came to an end at the hands of the mighty Malaysian.

Natalie Grainger, the former world number one from the USA who is currently recovering from a foot injury, slips to No3, while Australia’s Rachael Grinham – beaten by sister Natalie in the World Open semi-finals – holds onto fourth place, ahead of English pair Alison Waters and Jenny Duncalf.

But Madeline Perry, the Irish number one who suffered a career-threatening head injury two years ago, is rewarded for her surprise appearance in the final of the internationalSPORTgroup British Open in Manchester with a rise to No7 – her best ranking since a career-best No6 in April 2006.

The 32-year-old from Banbridge, near Belfast, made her British Open breakthrough by beating Nicol David – her first win over the Malaysian in 15 career meetings – in the quarter-finals, and went to make the last eight of the World Open in the Netherlands capital.

Dutch star Vanessa Atkinson also records a rise in the October list, moving up to 12 after a last 16 finish in her home country – and England’s Tania Bailey also makes a return to the world top 20 at 19.

Outside the top 20, Australian Donna Urquhart celebrates a career-high 26 ranking after becoming the only qualifier to reach the British Open quarter-finals – then making her maiden appearance in the World Open after qualifying.