Egypt’s third seed Karim Darwish fought back from two games down to beat English favourite Nick Matthew to claim a surprise place in the final of the $147,500 Qatar Classic, the ninth and penultimate 2010 PSA Super Series squash championship at the Khalifa International Tennis & Squash Complex in Doha.

At two games up in the repeat of last year’s final, defending champion Nick Matthew looked to be heading for his eighth Super Series final this year. But Darwish turned his game around and stunned the 30-year-old world number two from Sheffield by battling back to win 8-11, 5-11, 11-8, 12-10, 11-8 in 73 minutes.

“Nick has been winning pretty much everything last year, he was world number one still a few months back, so beating him tonight is very special to me,” Darwish told www.squashsite.co.uk afterwards. “When I can play like that, I’m alright.

“Against Shabana tomorrow, I won’t be able to afford to wait the third game to play. I’ll have to start from the first rally,” added the 29-year-old world No3 from Cairo, now in his 32nd Tour final.

The defeat was Matthew’s second in less than two weeks from the position of a 2/0 lead – after crashing out of the Kuwait Open to England team-mate Daryl Selby.

“Karim did well to come back from 2/0 down,” said the Englishman. “It’s really a good effort, well done to him.

“You are never too old to learn. Now there’s a few weeks of hard work for the Worlds – whatever the result here, that’s always been my target.” 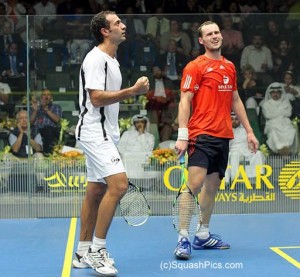