Former world number one Karim Darwish claimed his anticipated place in the quarter-finals of the Cathay Pacific Sun Hung Kai Financial Hong Kong Open – but the fourth-seeded Egyptian was taken the full distance before overcomingCameron Pilley in the second round of the $147,500 PSA World Tour squash event, the fifth PSA Super Series championship of the year, in Hong Kong.

Darwish went into the match boasting a 7/0 career head-to-head record over the tall Australian – but soon found himself 2/1 down as 16th seed Pilley imposed himself on the match.

Darwish, the Cairo-based 28-year-old who spent most of last year topping the world rankings, will now face French rivalThierry Lincou, also a former world No1, for a place in the semi-finals.

The opening match of the day was an all-English clash between favourite Nick Matthew, the world number one hoping to notch up his sixth Tour title in a row in Hong Kong, and Daryl Selby, the ninth seed who made up for disappointment of a shock first round exit in the recent Australian Open by overcoming top-ranked Malaysian Mohd Azlan Iskandar in the opening round. 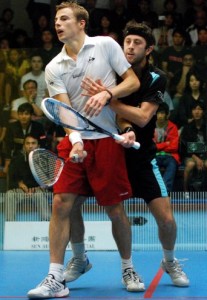 “Daryl’s improved a lot and he’s looking for scalps of the top players – so I knew it would be tough,” the 30-year-old from Sheffield explained to www.squashsite.co.uk later. “When I got the balance between attack and defence wrong, I had problems. I thought I could have finished a couple of the games off a little better, but that’s credit to him for making it tough.”

Selby was disappointed to lose: “I thought if I could have taken that second I might have put myself in a position to win, but Nick just played the big points at the end of the games better, whereas that’s what I did against Azlan yesterday.

“But I’m happy that I played well yesterday and today, after my poor result in Australia, it’s good to get the season started.”

Farhan Mehboob, the Pakistan qualifier who lined up against fifth seed Gregory Gaultier today after causing the only upset on day one, went down in straight games to the 27-year-old Frenchman, losing 11-5, 11-7, 11-4 in 43 minutes.