Karim Darwish and title-holder Ramy Ashour will meet in an all-Egyptian semi-final of the ROWE British Grand Prix after prevailing in the second day of quarter-final action in the PSA World Series squash event in its second year at the National Squash Centre in Manchester. 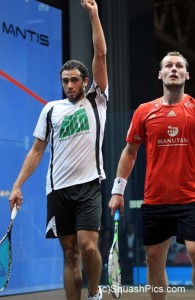 Underdog Gaultier took the lead various times in the opening game – and had two game-balls from 10-8. But gifted world No2 Ashour refused to submit, winning four points in a row to take the game after 27 minutes.

With both players producing a dazzling array of winners, Ashour edged ahead from four-all in the second to open up a two-game lead. And, after recovering from a ‘lost ball’ at 5-3 in the third, the Egyptian surged ahead to clinch his second match ball, winning 12-10, 11-7, 11-9 after 69 minutes.

“The first game was the longest ever,” the exuberant Ashour said afterwards. “We both kept hanging in there. I gave a big push – but it could have been anybody’s game.

“Winning the first game always gives you a boost,” added the 23-year-old from Cairo. “Greg was hitting nicks all over the place. Hisham told me to be patient – and I tried to be as patient as I could. There were some crucial points for both of us.

“Karim and I play each other a lot – we know each other’s games. It’s always a physical and mental battle. I just hope I can play well and stay injury-free.” 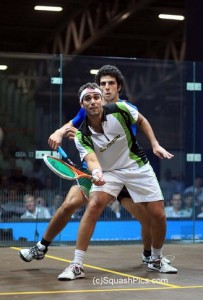 In the first quarter-final, former world number one Karim Darwish took on fellow countryman Omar Mosaad, the second young opponent he has faced from his home city of Cairo who is rapidly making a mark on the PSA World Tour.

The unseeded 23-year-old Omar Mosaad took his place in the last eight – only the second World Series quarter-final of his career – after a significant upset over experienced Frenchman Thierry Lincou, the former world champion who was seeded eight.

And after Darwish led through most of the first game, it was underdog Mosaad who took the early upper hand in the second, forging a 7-4 lead.

The third seed reeled off five points in a row to put himself back into contention and after Mosaad saved one game ball it was soon 2/0 to Darwish.

The senior Egyptian romped to a 5-0 lead in the third before Mosaad replied, but Darwish held off his tall opponent’s advances to close out the match 11-6, 11-9, 11-7 after 57 minutes to earn his first World Series semi-final berth this year.

“I tried to be patient on court today. I didn’t make a lot of mistakes,” said Darwish.

“I had to move him around the court, he’s a big guy. He’s a very tough opponent, he played really well.”

When asked what he thought of the fact that he might meet a third successive compatriot in the semi-finals, Darwish responded: “There are a lot of Egyptians in all events today. If I want to reach a final, I’m sure to need to beat an Egyptian.”

Darwish agreed that his win in the decider of the World Team Championship final had given his game a boost: “It’s especially significant in this position in the rankings where you really need to be confident. It’s 80% in the head – you have to be really confident.”