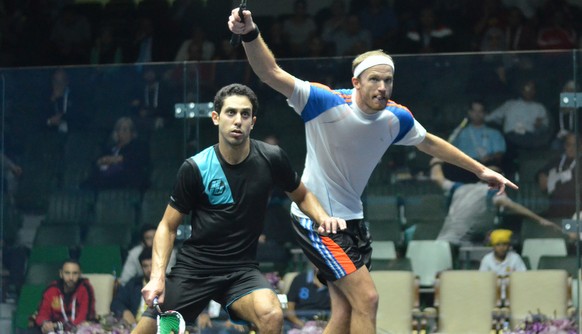 Unseeded Stephen Coppinger, the World No.24 from Cape Town, pulled off what he described as the biggest win of his career as he beat Egyptian World No.9 Tarek Momen to move into the quarter-finals of the 2014 Qatar PSA World Championship. 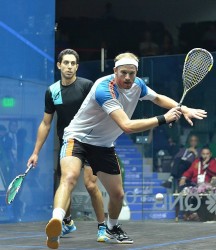 The 30-year-old, who knocked World No.11 Daryl Selby out in round one, put in a thunderous performance to get past Momen in an 85-minute thriller, completing the victory with a dramatic final rally to take the match 12-10, 9-11, 14-12, 8-11, 11-8.
It’s a victory that sees him become the first South African since Roland Watson in 1979 to reach the quarter-finals and he will now take on World No.1 Mohamed Elshorbagy, conqueror of German Simon Rösner, for a place in the semi-finals.
“Considering the setting, the circumstance and that this is the World Championship, this is without a shadow of a doubt the biggest win of my career,” said Coppinger.
“I was just a few points away from a win and then had to start all over again but I done something similar in the first round so I had the belief that I could do it.
“I’m in the quarters now and I don’t think any player gets there easily, we’ve all had our own battles. I’ve come through a few of those so I’m mentally in the right place, so lets see what happens tomorrow.” 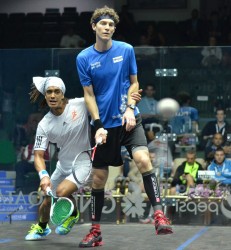 Australia’s top ranked squash player, Cameron Pilley, joined Coppinger as the only other unseeded player in the last eight after he defeated Botswanan Alister Walker 3-0.
Pilley, the current World No.20 from Yamba, took out World No.8 Peter Barker in his first round match and followed up that performance with an impressive and dominant display against Walker to set up a last eight encounter against World No.2 Gregory Gaultier.
“I’m absolutely stoked to be in the quarters of the World Championship,” said Pilley.
“It’s an awesome feeling, especially after the last few months where I’ve been out of form.
“Alister likes to use his physical attributes on the court and like with every player, I done what I could to neutralise their talents, and today everything worked to a tee for me.”
Elsewhere defending champion Nick Matthew survived a tough test against Saurav Ghosal of India to set up a last eight battle with four-time champion Amr Shabana while two-time winner Ramy Ashour will meet Spanish champion Borja Golan after winning a thrilling match with Colombian Miguel Angle Rodriguez. 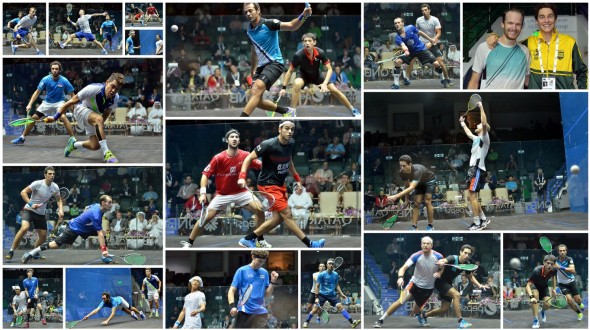