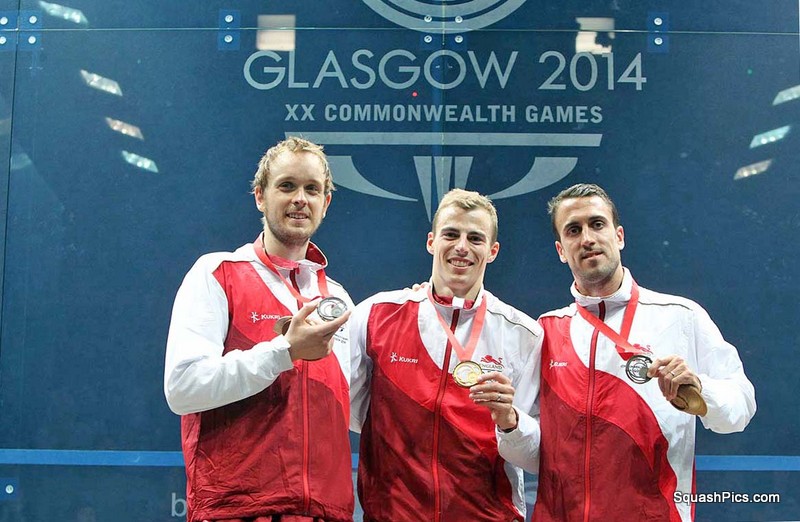 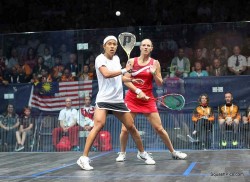 David – the world No1 from Malaysia who is competing in her fifth successive Games since her maiden home soil appearance in 1998 in Kuala Lumpur, aged 15 – beat England’s world champion Laura Massaro in the women’s final, whilst world No2 Matthew survived a five-game battle with fellow Englishman James Willstrop in a repeat of the 2010 men’s final in Delhi.

The matches brought to a close an exhilarating five-day festival of squash staged on a spectacular all-glass showcourt atScotstoun Sports Campus in Scotland’s largest city, watched by unprecedented crowds in excess of 2,000 each day.

Massaro, the only player who has beaten David five times, established leads of 8-4 and 9-7 in the opening game before reaching game-ball at 10-9. 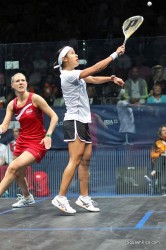 But the 30-year-old Malaysian, who has topped the world rankings unopposed since August 2006, played the shot of the match – a forehand boast which just cleared the tin – to draw level before clinching the game 12-10.

“Winning the first game was crucial – it was really tough out there, I had to put the pressure on,” said the beaming champion. “I’ve been working on that shot (to save game-ball at 9-10) for a long time!

“Laura is the most competitive player on the Tour – she’s so determined, she just doesn’t let go. 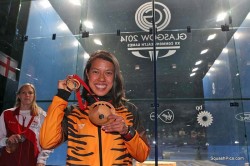 “It’s only just hit me that I am the Commonwealth Games champion for the second time – it really is remarkable.

“Today is the Malaysian festival of Hari Raya (the Muslim ‘Eid Mubarak’ celebration to mark the end of Ramadan) – which makes it even more special for me.

“I really wanted this gold.”

Massaro, a Commonwealth Games medallist for the first time, said: “Before the event, my goal was to get a medal. I was desperate for gold and when you spend the whole time aiming for that, this is a bit disappointing.

“I know when Nicol gets in front and gets the first game, it settles her down. She played really well – but I felt I was playing really well too,” added the world No2 from Preston.

On David’s crucial shot in the opening game, Massaro said: “She tends to pull out an awesome shot on game-ball down!” 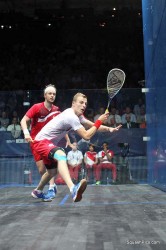 The men’s final also featured the top two seeds – with the Yorkshire pair marking their 53rd meeting and Matthew boasting a 41-11 lead.

Defending champion Matthew took the opening game after 25 minutes – but Willstrop recovered from an early Matthew lead in the second to draw level. 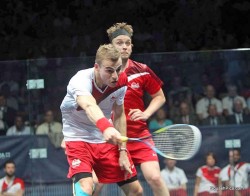 Willstrop seemed tired in the third as Matthew regained his lead – but the Harrogate-based underdog dug deep to win the fourth to set up a decider.

“Considering what we’ve both been through, this match is a testament to both of us – we were both winners out there and both deserve to stand at the top of the podium,” Matthew told the media afterwards.

“I was on a hospital bed six weeks ago and he was told he might never play again.

“And Chris (Robertson) reminded me of that when I came off court at two-all – ‘you’re a winner whatever happens’ said my coach. 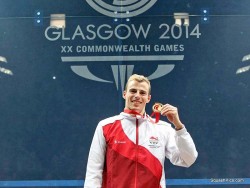 “I probably played some of my best squash in the fourth game, which I lost,” added the Sheffield star.

“I’m very proud to win a second gold medal – and it’s thanks to the people who have helped to get me to this stage.”

It was an unexpectedly upbeat Willstrop who explained his thoughts after his defeat. “I’m disappointed to lose, of course, but I am really proud of my performance. I just enjoyed every second of it – I just loved being on that court. I’ve come off having lost, but I’m happy.

“I have great respect for what Nick has achieved. It’s miraculous what he’s done to get back after his surgery.

“When I got the results of the second scan (after a first had suggested a serious condition), it was like getting a new lease of life.

“I did hit a wall in the third – but I got second wind in the fourth. I haven’t had a match like that for ages, but neither has he.

“This is not a loss – I’ve won a silver medal. Playing on an occasion like this doesn’t get any better.” 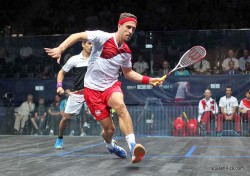 After winning his second successive singles bronze, Barker said: “I was really gutted after yesterday – but to have come away today without a medal would have been even worse. It’s been a long and tough week. I wanted a medal and badly wanted to improve on my bronze in Delhi.

“It’s the first England medal – and that’s why we are here. Medals is what the England team have all worked so hard for.

“Saurav played well – it was a really hard match and for him to have backed up his earlier matches in this way shows how far he has come. He has had some great PSA wins.

“I hope it’s a great final – I wish I was in it. I know Nick has worked really hard over the past few weeks and the reaction on James’s face last night when he won shows how good he feels about making the final.

“This crowd has been the best I’ve ever played in front of. People asked me yesterday if I’d be able to pick myself up for this today? Believe me, it’s a privilege and honour to be able to play in such an arena.”

When asked if he could look positively at the result, as the youngest of the 2014 semi-finalists and the only one likely to be competing in the 2018 Games, Ghosal said: “It’s hard right now to think of that. I’ve trained really hard for this – four years is too far away. Right now I’m just gutted.

“To do everything I’ve done and not come away with anything tangible is super depressing. Yesterday I played really – and came up against two players really sharp on the day. But I’m happy I could back up four days in a row.” 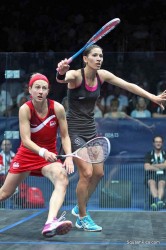 King’s reaction to her win: “One of the most pleasing things about this is the way I’ve played all week. I really enjoyed myself out there today – I felt able to let go. I loved every second of it – it’s amazing what you can do when you relax.

“I felt I rose to the occasion.

“I’m really happy to have won a medal and can now look forward to doing better in four years’ time – I’m still young enough, aren’t I?” said the 25-year-old.

“The crowd and atmosphere is AMAZING and the court is beautiful! I’ve never played in front of anything like it – and it’s been like this all week, with the crowds cheering for both players. I have to say a big thank you to Scotland.”

Waters’ reaction was brief: “Joelle played well – she was better on the day. It just wasn’t my day.”