Egyptian squash ace Ramy Ashour became only the third player to win the prestigious PSA World Series title a third time when he recovered from two games down to beat French rival Gregory Gaultier in the final of the J.P. Morgan Tournament of Champions at Grand Central Terminal in New York.

The first two games were owned by Gaultier. The 30-year-old from Aix-en-Provence established possession of the T early in the match, using stinging pace and tight shots to keep the ball deep in the backcourt and deadly drops to move his opponent the full length of the court.

“It was an especially impressive performance given that each of Gaultier’s last two matches had been physically demanding and lengthy,” explained tournament spokesman Beth Rasin.

The Frenchman himself found his initial performance unexpected. “I was surprised with the way I was moving in the first two games,” Gaultier noted after the match.

The 25-year-old Egyptian, who is often a slow starter, started to find his rhythm in third game – not a moment too soon. With a two-point lead for most of the game, Ashour was able to take the edge off Gaultier’s previously relentless attack. Even so, down game ball at 9-10, Gaultier hit a cross court roll nick that tied the game.

Just two points away from losing the match, Ashour – as he has consistently proven himself capable of doing – stepped up in a big way. Having forced a loose ball to the middle from Gaultier’s racket and with the Frenchman pinned behind him, Ashour quick flicked the ball for a backhand nick rollout winner. He followed that with a backhand cross court nick winner to take the game.

The TV cameras that were providing the live feed zoomed in on Ashour, whose competitive desire was evident in his wide eyed and focused expression. 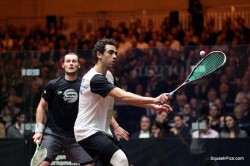 The 20-minute third game took a big toll on Gaultier, who managed to stay close only through two-all in the fourth game. At 5-2, the play became fast and furious with each player hitting three reflex volleys until Ashour hit a backhand volley winner from the gut which brought the standing room only crowd to its feet with raucous applause.

Ashour turned to face the crowd and played air guitar with his racquet to acknowledge his delight in having won the point in such spectacular fashion. From that point on, Ashour took complete control of the match.

“Once he saw my energy drop, he raised the pace even more and that was it for me,” observed Gaultier.

Ashour closed out the match with an 11-1 fifth game win to become only the third player to win three Tournament of Champions titles, and the first since Briton Peter Nicol in 2004. 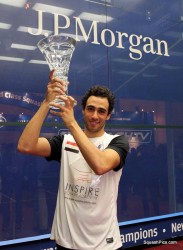 Ashour, who had previously mentioned his desire to be known as a fighter, certainly provided ample evidence of his fighting will in the championship match.

“What Ashour has demonstrated this week is that any lead against him is tenuous at best,” said tournament commentatorWill Carlin.

Ashour continued: “With Greg playing so well in the beginning, I just had to keep digging. To beat Greg when he is playing as well as he did at the beginning of the match, is amazing. I am so proud of myself.” 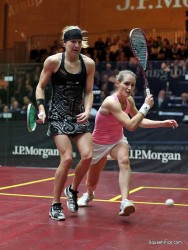 The 34-year-old, seeded fourth for the WSA World Tour Silver 25 event, made a troubled start to the tournament, scraping a five-game battle against Nour El Tayeb.  But the Dutchwoman’s form improved as she progressed, closing out Sarah Kippax in four games before adding older sister Rachael Grinham to the list of defeats in an assured three-game display.

In the final she faced an Australian against whom she had never lost a WSA match.  Kasey Brown has seen a similarly tough five-game effort in her first round match, in which she came from two games behind to snatch victory against Heba El Torky. 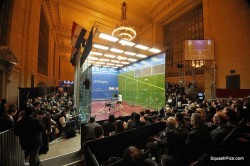 The No.3 seed then saw off the challenge of local hope Amanda Sobhy, before dismissing top seeded player Madeline Perry in the semis with a commanding 3-1 win to reach the final.

Boasting a 6-0 lead over Brown in previous competitions, Grinham set about the early exchanges with lightning-quick attacks and energetic movement.  The opening points were spread evenly between the pair, but it was the Australian-born Dutchwoman who began to vary the pace to disrupt Brown’s rhythm and take the first game. 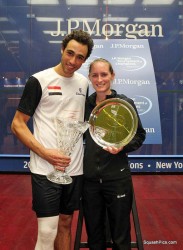 A similar story unfolded in the second, with Brown unable to establish a foothold in the contest.  Grinham’s game-plan was executed perfectly, and she worked winning shots into her game to take a two-love lead against the higher seed.

There was little Brown could do to combat the strategies of her opponent, and again at the half-way stage of the game, Grinham extended her lead.  She proved too quick, patient and lethal in the front corners on this occasion, and closed out her 19th WSA World Tour title in impressive fashion.

Speaking after the match, Grinham spoke of her delight at retaining the Tournament of Champions title.  She said: “I wanted to get good length and width on the ball to take away any opportunities for Kasey to volley.  When I am moving well, I feel I should be able to get every ball back.”

“I am feeling a bit more tired than usual because looking after Kieran [Natalie’s son] takes a fair amount of energy. But that has turned out to be a good thing because I don’t have that extra energy that causes nervousness.”

“At the beginning of the week, I wouldn’t have thought I would win again,” Grinham reflected after the match, acknowledging the three higher ranking players in the draw. “It still hasn’t quite sunk in that I have won the Tournament of Champions again.” 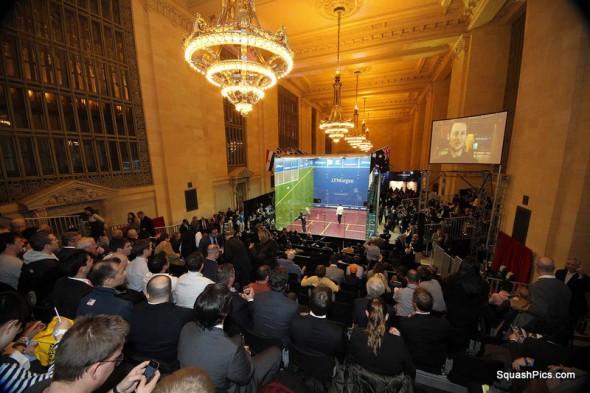